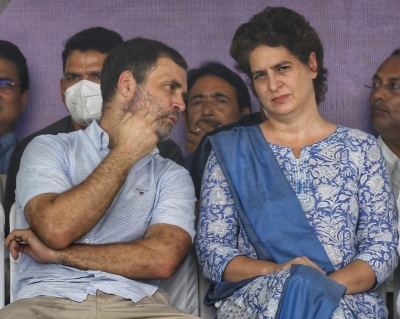 Bengaluru: The last leg of Bharat Jodo Yatra led by Rahul Gandhi will be taken up in Karnataka from Friday. The padayatra will enter the Raichur district of Karnataka from Mantralaya in Andhra Pradesh.

Meanwhile, party sources confirmed that another scion of the Gandhi family, Priyanka Gandhi Vadra is most likely to take part in the padayatra on Saturday.

The padayatra resumed from Mantralaya Temple Circle in Andhra Pradesh at 6 a.m. It will enter Karnataka’s Gillesegur in Raichur district at 10 a.m.

The Congress leaders will take up padayatra for three days in the district. The padayatra will cross the Tungabhadra bridge and pass through Yaragera, Raichur city and Shakthinagar.

Rahul Gandhi is interacting with the farmers and local people during the Yatra. He is staying at the Ranganatha Swamy Temple at Yaragera village.

On October 23, the padayatra will enter Telangana. The Congress leaders have been tasked with gathering 20,000 to 30,000 people during the yatra.

The police department has deputed 2,000 police personnel to ensure security. Padayatra has so far got a good response from the people in the state. Sonia Gandhi had also taken part in the padayatra briefly in Mandya district of south Karnataka.

The Congress party leaders are upbeat about the padayatra and they maintain that the party has gained right momentum in the run up to the state Assembly elections. The elections are scheduled to be held in another six months in Karnataka.

The internal survey conducted by the Congress leaders has shown that it will obtain a simple majority in the state Assembly elections.

The padayatra entered Karnataka on September 30. It will cover 511 kilometres of distance in the state.