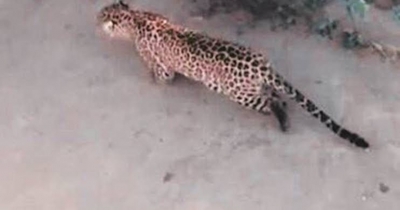 Gurugram: Panic has gripped the Maruti Suzuki plant in Manesar here after a leopard was spotted on the premises and is still ranging free, a senior forest official said on Friday.

The big cat was first spotted in the factory at around 7.15 a.m. on Wednesday by a worker who raised an alarm. Images of the animal were also captured in the CCTV cameras installed in the factory.

A number of people, including workers, guards and transporters, were inside when the leopard was seen.

Fearing an attack by the big cat, the management immediately issued a safety advisory for the workers and others.

The forest official said police reached the plant and cordoned off the area, while Forest Department officials rushed there to rescue the animal.

“In the CCTV footage, the leopard was seen coming inside the factory from a cow shelter of Kasan village which is adjoining the factory, IMT Manesar SHO, Inspector Subhash told IANS.

“The police received the call around 7.25 a.m. on Wednesday and we immediately alerted the forest officials but after a 2-3 hour-long search operation, we could not find the animal. Probably the leopard left the factory,” the SHO said.

He added that the production was not affected as the area where the animal was spotted was far away from the manufacturing area.

“A Forest Department team has inspected the area but could not find the leopard in the factory. It could be possible that it has left the factory and returned to the Aravali region. The area is under forest team’s vigil. As a precaution, we have kept tranquillisers ready to control the animal,” Principal Chief Conservator M.S. Malik said.

Forest Department officials are keeping a vigilant eye on the entry and exit points of the plant for a few days so that they can make sure the leopard has vacated the plant.

Spread over 750 acres, the plant is one of Maruti Suzuki’s largest and manufactures a range of vehicles such as Swift, Swift Desire, and Ertiga.

Meanwhile, despite repeated phone calls, Maruti Suzuki management was not available for comments.