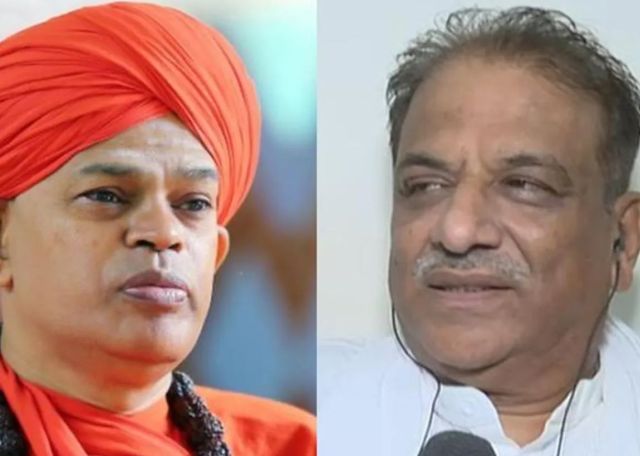 Chitradurga: In an interesting development in connection with the Chitradurga Lingayat Mutt sex scandal, S.K. Basavarajan, former administrator of the Math, surrendered before the Chitradurga Rural Police on Thursday.

Meanwhile, Odanadi NGO, which brought out the scandal, is crying foul with regard to the development of an audio clip release.

According to police, Basavarajan — once a close associate of rape-accused seer Shivamurthy Murugha Sharanaru, now turned into a foe — was missing after the lodging of a police complaint regarding surfacing of an audio clip which allegedly contains the conversation of the victim being tutored against the accused seer.

Police sources explained that Basavarajendra, the prime accused in the audio clip case, had mentioned Basavarajan during police investigations. Basavarajendra is accused of collusion with a vested interest to defame the accused seer for minting money.

Basavarajan is also facing allegations of planning the burglary of 46 photos from Murugha Math.

A police complaint is being lodged in this regard on October 6. Basavarajan was instrumental in lodging of POCSO cases against the accused seer by giving shelter to the victims of the first case, along with NGO Odanadi.

The in-charge seer of Murugha Math Basavaprabhu Swamiji has filed a complaint against Basavarajendra, a resident of Junjanawadi village in Belagavi district, the mother of the complainant in the second Pocso case against seer and members of Odanadi NGO from Mysuru, police said this morning.

Stanley, the Director of Odanadi, has stated that the audio release is an attempt to derail the investigation of the scandal. “I have spoken to the victims. They had said that they were too scared. The release of the audio clip is a good development in a way. The government should consider this seriously and conduct a high-level probe,” he stated.

It also stated that this is a well-planned conspiracy, carried out as per directions of vested interests. The police have officially stated that the charges against the rape-accused seer are proved in the first POCSO case.

Demanding strict punishment for the accused, former Chief Minister B.S. Yediyurappa stated that no one expected the accused seer to stoop so low.