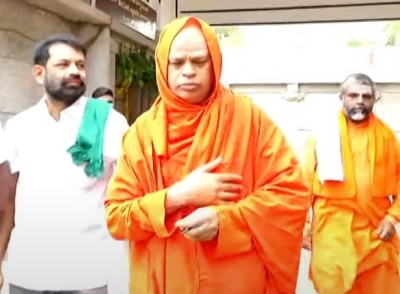 Chitradurga: Karnataka Police have arrested the mother of the minor victim in the second POCSO case against Lingayat seer Shivamurthy Murugha Sharanaru.

The arrest has been made in a case alleging conspiracy against the seer, police said on Saturday.

The accused, who worked as a helper in Chitradurga mutt’s kitchen, was arrested by the Chitradurga Rural police. She is facing charges of playing into the conspiracy to fix an arrested seer through her daughter. The police had arrested two persons earlier in this connection.

The in-charge seer of Murugha Math Basavaprabhu Swamiji had filed a complaint regarding hatching a conspiracy to frame arrested seer Shivamurthy Murugha Sharanaru in POCSO and atrocity cases to make money.

The complaint was lodged against Basavarajendra, a resident of Junjanawadi village in Belagavi district, the mother of the complainant in the second POCSO case against seer and members of Odanadi NGO from Mysuru. The police had arrested Basavarajan, the former administrator of the Chitradurga Math in this case. Basavarajan had given shelter to the victims in the first case before lodging the complaint.

The complaint by the in-charge seer demanded that the accused have entered into a conspiracy against the Shivamurthy Murugha seer to defame him to make money. The 14-minute audio clip allegedly showed the victim girls being tutored to lodge a case against Shivamurthy Murugha Sharanaru.

The complaint also stated that this is a well-planned conspiracy, carried out as per directions of vested interests. The police have officially stated that the charges against the rape-accused seer are proved in the first POCSO case.

Former Chief Minister B.S. Yediyurappa had stated that no one expected the accused seer would stoop down so low and he also said that he should be punished.

Meanwhile, rape accused Shivamurthy Murugha Sharanaru in his statement to the police maintained that he didn’t even know the victims and that he could have met them in assemblies at the Math during prayers.