Laalima was a little girl of five years. She loved to dance, sing and most of all play with her little brother Lokesh. Laalima cared for little Lokesh ever since the time of his birth. Her mother had said to her on the day of his birth “Laali beta, this is your brother, you are now the older one, you must make sure that you take care of him when I’m not around” Laali’s mother worked at a textile merchant’s house.

Laali looked after her little baby brother when her mother was not around. She loved to watch him sleep and she spoke to him as if he understood. As Lokesh started moving about, little Laali took him along to play with her friends.

Laali never let him out of sight. Her mother was proud of how mature little Laali was for her age.

Laali studied at a school which was not too far from her house. She took her little brother along with her. As Lokesh turned one he could speak many words and sentences and would run to school along with his big sister. Laali enjoyed going to school and would finish all her homework as soon as she reached home. She loved studying and dreamt of being an IAS officer someday.

On Laali’s thirteenth birthday she got up as usual finished helping her mother with the household chores and got ready to go to school. As she was about to step outside, she heard her mother call. “Yes ma,” she said. “Come here I have something important to tell you”. Said her mother. “What is it ma?”. asked Laali with a curious look on her face. “Beta, from today you don’t need to go to school. Whatever you have studied so far is more than enough. Come along with me to Setji’s house they need a maid and you can help me. We can earn extra money to support Lokesh’s studies”. Laali’s dreams shattered as she heard her mother utter these words. However, without a word Laali obeyed her mother and went with her to Setji’s house.

Setji was a wealthy textile merchant with three daughters and two sons. All his five children were well settled. His sons managed the family trade while his daughters became reputed doctors. Setji lived in a mansion with his family. His daughters were settled abroad while his sons lived with him.

Laali walked into the mansion unsure of her steps, worried that if she touched anything close to her it would break. Her mother asked her to be close to her and not to wander around the house. Setji was at the table reading the newspaper when he noticed Laali and her mother. “Oh, Kamala! Is this your daughter?”. “Haan ji, Saabji” said Kamala. “Come here Beta.

What’s your name?” Setji asked the girl. “Laalima,” said the shy girl. “Such a lovely name. Do you go to school?” asked the man. “I did till yesterday, Sir, but I won’t be going from today”. “And why not,” said the man impressed by the way Laali spoke. “Sir, we are poor and my mother cannot afford to send both my brother and me to school. So, I will start working from today”. Setji immediately called Kamala and asked her if this was true. Kamala agreed with tears in her eyes. The poor woman had no other option but to admit to the truth. Setji asked Laali, “Beta What do you want to be when you grow up?” Pat came the reply “An IAS officer” “In that case, I don’t want you to come and work at my house. You have to study to become an officer. Study well and achieve your dreams. I will support you,” said the kind, old man. Laali was overjoyed. She couldn’t stop her tears. Her mother hugged her daughter and agreed to the old man’s words.

Laali continued her studies and achieved her dreams. She came back to the merchant’s house as an IAS officer. Laali’s determination, dedication and hard work helped her achieve her goal. 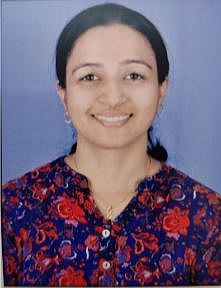 Shanthi Albuquerque is a student of 2nd year B.Ed at St. Aloysius institute of Education, Mangalore.