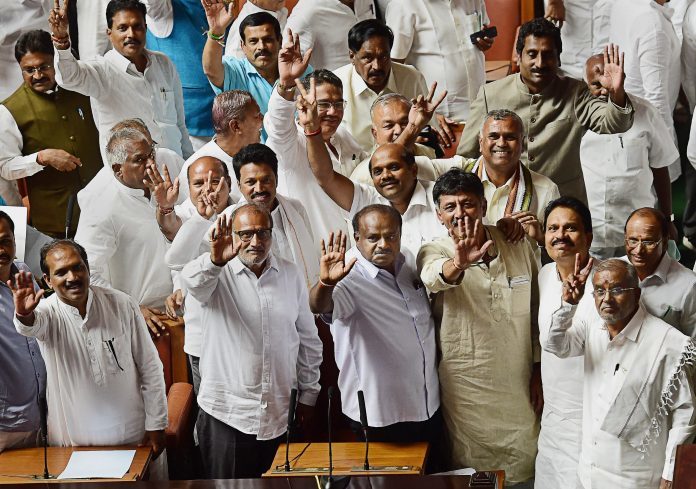 BENGALURU: The ruling coalition in Karnataka, in danger of collapsing after multiple resignations, will have to prove majority on the floor of the house by 1:30 pm on Friday, the Governor has written to Chief Minister HD Kumaraswamy.

“Prima facie you have lost majority”, Governor Vajubhai Vala’s letter reads. The governor, on a request from a BJP delegation, had urged the Speaker to consider a trust vote by the end of the day but the Speaker adjourned the assembly till tomorrow despite the BJP insisting on a vote this evening. In protest, the BJP has decided that its lawmakers will spend the night in the assembly.

Bangaluru: The trust vote of Chief Minister HD Kumaraswamy’s government in Karnataka will not be held today evening, though BJP lawmakers have said they will stay in the Assembly overnight.

Karnataka Chief Minister HD Kumaraswamy had moved the confidence motion in the state Assembly with the 14-month old Congress-JDS government headed by him hanging by a thread after a rebellion by a section of ruling coalition lawmakers. With the numbers stacked against the ruling coalition, Kumaraswamy moved a one-line motion, saying that the House expresses confidence in the ministry headed by him.

Sixteen legislators – 13 from the Congress and three from JDS – have resigned in the last two weeks, while two independent legislators have withdrawn their support to the coalition government. The resignations, if accepted, will bring down the ruling coalition’s strength in the 225-member assembly to 100 from 118.

Ahead of the trust vote, BJP state president B S Yeddyurappa had expressed confidence that the motion would be defeated. “I don’t know what their party (coalition partners Congress and JD-S) is going to do but we are 105. They will be less than 100. Hundred per cent we are confident that the confidence motion will be defeated,” Mr Yeddyurappa told reporters at the Vidhana Soudha, which houses both the houses of Legislature.

On Wednesday, the Supreme Court left it to the Speaker to decide on the resignations of the rebel lawmakers. At the same time, the court said they cannot be forced to attend the assembly, which blunts the threat of disqualification. Karnataka assembly speaker K R Ramesh Kumar welcomed the Supreme Court decision, saying he would conduct himself responsibly as per the principles of the constitution but did not mention by when he would decide on the resignations.