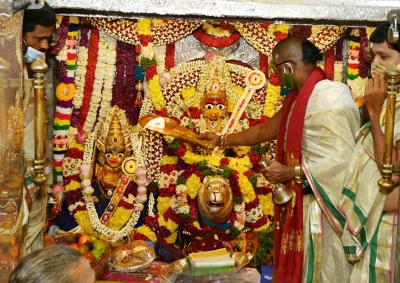 Major temples in T’gana, Andhra closed due to solar eclipse

Hyderabad: All the major temples in Andhra Pradesh and Telangana have been closed on Tuesday on account of the solar eclipse. All the worship services have also been suspended at these temples.

The Tirumala Tirupati Devasthanam (TTD)-run Venkateswara temple at Tirumala in Tirupati district of Andhra Pradesh was shut at 8 a.m. on Tuesday and will reopen at 7.30 p.m. the same day. All the temples under TTD management have also been closed due to the solar eclipse on Tuesday.

In Vijayawada district, the famed Kanaka Durga temple’s doors were closed at 11 a.m. on Tuesday and will be opened again at 6 a.m. on Wednesday. Similarly, the Simhachalam temple near Visakhapatnam, and the Arasavilli temple in Srikakulam district were closed on Tuesday.

In neighbouring Telangana, the Yadadri temple has been shut for nearly 12 hours beginning 8.50 a.m. on Tuesday. Entry for devotees to the temple will however be allowed from 10.30 a.m. onwards on Wednesday. The Ram temple at Bhadrachalam has been closed for the day as have other major temples in the state.