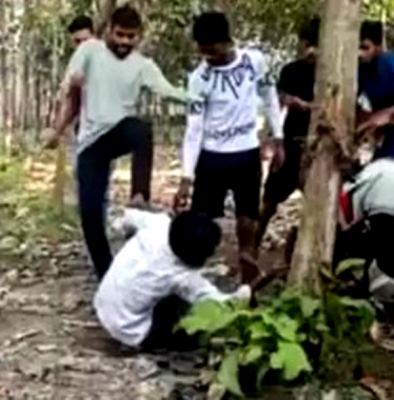 A group of youths in Uttar Pradesh’s Gonda district allegedly thrashed their rival after pinning him down and then urinated on him.

Gonda: A group of youths in Uttar Pradesh’s Gonda district allegedly thrashed their rival after pinning him down and then urinated on him.

Police said the video was shot on October 31 in Wazirganj under Kotwali police circle, where a group of youths had a fight.

One of the youths, identified as Kaptan Singh, spotted in the video has been arrested.

ASP Gonda, Shivraj Prajapati said that after the video surfaced on social media, a police team approached the family and got an FIR registered from the victim Shiva Singh under the charges of attempt to murder, rioting, armed with rioting weapons, criminal intimidation and punishment for voluntarily causing hurt.

Prajapati said that police teams have been formed and the accused will be held soon.

“Prima facie it has surfaced that both the groups, one led by Shiva and another led by Kaptan, were at loggerheads since long for establishing supremacy in the area. Kaptan was out on bail in a Gangsters Act case, while Shiva also had cases of rioting and Arms Act registered in his name,” said Prajapati.

The two-minute video shows that a group of youths surrounded their rival, later identified as Shiva, and thrashed him, forcing him to confess that he had planned to kill one Ankit.

They also hurled abuses at him.

In the video, it seemed that the attackers had taken the youth to a forest where the victim is seen standing behind a tree and a youth then appears and kicks him, making him fall down.