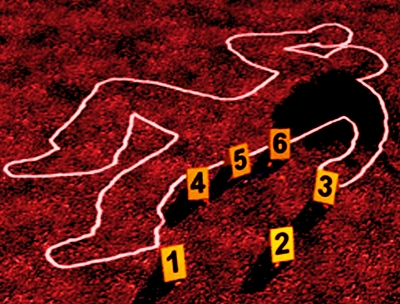 Bengaluru: In a disturbing development, a man was hacked to death after his wife thrashed a group of men, who used to harass her, with her sandals in front of police here.

The deceased has been identified as 33-year-old Chandrashekar, a resident of Kondappa Layout near Yelahanka. According to police, Chandrashekar was hacked to death by miscreants when he was standing at the terrace of his house.

The incident happened late on Friday night. The preliminary investigations by the police have revealed that the murder was committed to take revenge.

According to police, the deceased Chandrashekar hails from Pedihatti village in Hindupur district of Andhra Pradesh. He was married to Shwetha, three and half years ago and came to Bengaluru six months ago.

During her stay in Hindupur, Andhra Pradesh, Shwetha had lodged a complaint with the police for being harrassed by a group.

After some elders intervened in the matter, peace was brokered between the miscreants and Shwetha in the presence of police. Shwetha was asked to hit the miscreants with sandals by the police.

The couple had left the place after the incident and settled in Bengaluru. Now, it is suspected that the miscreants hacked her husband to death to take revenge of the earlier incident. The police have taken up further investigation in the matter.