Mangaluru: Earlier this month, a tombstone with Portuguese inscriptions was found in Bolar where once the Portuguese fort of Sao Sebastio was built in 1568. It was eight years ago that another tombstone, that of the captain of the fort, Domingos de Moura Coutinho who died on April 30, 1629, was found. Although it had been lying neglected for close to four centuries, it was in good condition so that with the help of experts in Portuguese it was possible to decipher the inscription. The stone was shifted to Rosario Cathedral in 2013. 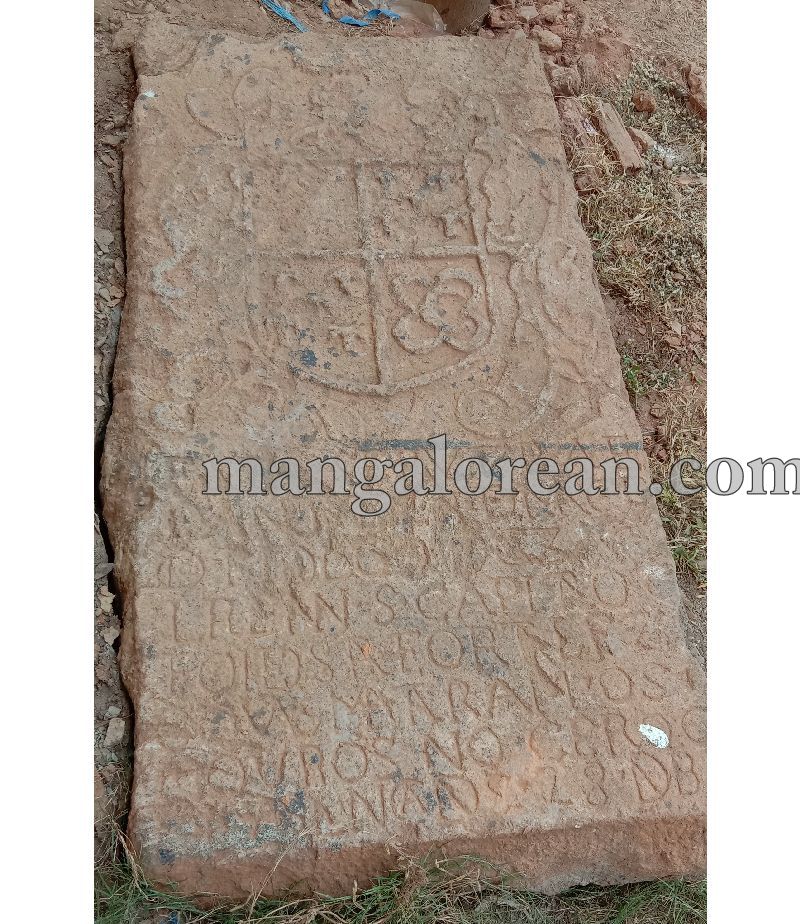 The recently discovered tombstone is in a worse condition. The inscription has been defaced, and the coat of arms damaged. However, with help from Europe, it has been possible to decipher some of it. It reads: ESTA SEPVLTVRAE DE ANTo PERa (or TEXa) DE MACEDO FIDALGO DA CASA DE L REI N.S. CAPITAO.Q FOI.DESTA FORTALEZA O QVAL.MATARAM.OS. MOVROS. NO.CERCO —NCA.AOS 28 DE ABRIL… Translated it reads “This tomb is of Antonio Pereira (or Texeira) de Macedo nobleman of the house of the King our lord, captain of this fortress who was killed by the Moors in the siege … present the 28 April…”

At this stage of the investigation, there could be two persons who were buried under the tombstone: Antonio de Pereira or Antonio Texeira de Macedo. For the story connected with the former, we turn to George Moraes’s Mangalore (1927).

In 1568, the viceroy sailed from Goa with 3,000 soldiers and landed on Ullal beach. That night, the Portuguese lit torches and began revelling under the clear starry sky even as the rest of the force was unloading supplies. Around 10 pm, about 500 of Rani’s soldiers attacked them. The attack was beaten off with the loss of a number of Portuguese. On the morning of January 5, 1568, the viceroy led the attack on Ullal. The city fell and was torched. Among the victors was Antonio de Pereira who commanded over 500 men. He was the viceroy’s brother-in-law.

Finding the land at Ullal unsuitable for a fort, the Portuguese built Sao Sebastiao on land given to them by the Bangher Raja, across the River Netravathi. Antonio de Pereira was appointed captain of the fort.

Two years later, Goa came under attack by an alliance of Deccan Sultanates and Calicut’s Samuthri. The Rani of Ullal seized the opportunity when she heard that Samuthri’s admiral Kunjali Marakkar (Kutty Pokker Ali) was nearby. She urged him to attack the fort offering to meet all his expenses. Pietro Della Valle, who visited Mangalore in 1623, describes the fort as the worst built he had seen in India. He quotes its captain as saying it was more appropriate to term it “the House of a Gentleman than a Fort.” Marrakar’s men began scaling its walls at night. Awakened by the noise, some Antonio de Pereira’s servants threw a chest out of the window, knocking down the ladder. The chest happened to be full of silver. Kunjali Marakkar’s men happily collected it and returned to the ship. That’s the story according to Moraes who quotes Pe Francisco de Souza’s Oriente Conquistado.

Moors refer to Muslims. There were no Muslim rulers around Mangaluru at that time, and the siege by Muslims could only have been by Kunjali Marakkar’s predominantly Muslim force. Portuguese names are long and the full name of the captain may have been Antonio Pereira de Macedo. If so, he died in Marrakar’s assault of the fort in 1570, 450 years ago.

If, however, the name on the gravestone is Antonio Texeira de Macedo, the tombstone was carved a little later. Antonio Texeira de Macedo was a captain in the Portuguese armada that sailed annually to India. His name appears in armadas of 1591 and 1593, and in 1594 when he captained a ship built in Goa (Madre de Deus). Another document mentions him as an official in the fort of Mangalore with a term of five years. He served only three when he was killed in its defence. The tombstone tells us his death occurred in a siege by Muslims. This would have been around 1600. It could have been a conflict with local Muslims against whom the Portuguese were always on the defensive.

Let us wait for some more expert opinion. Meanwhile, how many more tombstones are waiting to be found, buried under the sands where Sao Sebastiao once stood?

Report by Alan Machado, a famous Historian and Writer has deciphered the stone with the help of experts in Portugal