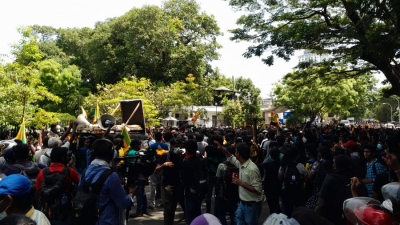 Colombo: Over 150 Sri Lankan organisations, including opposition political parties, trade unions, university students and civil rights groups, will stage a mass anti-government protest march on Wednesday in Colombo despite a warning by the police.

Six leading business chambers, including the Ceylon Chamber of Commerce, have urged the protesters to call off the march claiming it “could undermine the efforts being taken to resolve the current economic crisis with the support of the international community”.

“Any act of destabilisation taking place at this time and any negative publicity arising from it would seriously derail actions that are being taken to revive the economy including the efforts being taken to promote tourism,” the business chambers in a joint statement stated.

Hoteliers and tourism sector representatives also have urged to call off protest stating that affect the slowly booming tourism sector.

Meanwhile, the police had served letters to the political parties and other protest leaders warning that the march would not be permitted in the planned locations and action would be taken under Police Ordinance and other laws if any traffic congestion or obstruction is caused.

However the Human Rights Commission of Sri Lanka (HRCSL), an independent body, has asked the police not to use the Ordinance to block people’s rights to protest and thereby violate their Constitutional rights.

The HRCSL has deployed a team to monitor the protest march and any violations by the police.

A spokesman from the United National Party (UNP) led by President Ranil Wickremesinghe labelled those engage in the protest as “traitors”.

UNP chairman Vajira Abeywardena said that it would be a traitorous act to resort to public protests at a time when the government is engaged in a program with the International Monetary Fund (IMF) to recover from the economic crisis.

The violent street fights toppled the powerful Gotabya Rajapaksa-led government, forcing him to flee the country, as well as the resignation of his brother and Prime Minister, Mahinda Rajapaksa.

Wickremesinghe was elected as Presidentand he is supported by pro-Rajapaksa majority in Parliament and some MPs of the SJB lead by former presidential hopeful Sajith Premadasa.