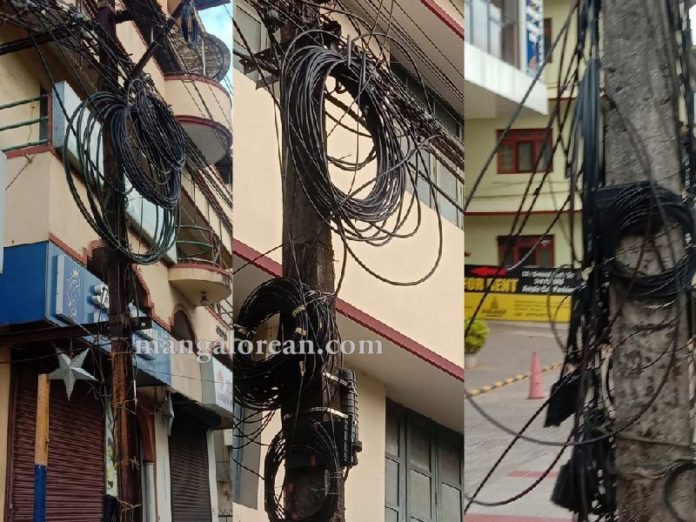 Mangaluru: Following a report published by Team Mangalorean in Mangalorean.com (Ref: Bundles of TV Cables Hanging from Electric Poles Pose Danger to Pedestrians ) on 4 November 2020, now we are hearing that Mangaluru City Corporation Commissioner Akshy Sridhar during a recent meeting has said that the civic body will remove all hazardous service proder’s cables (TV, Internet, etc, but not electricity lines) posing danger to public, where the service providers have drawn the cables through electricity poles and on medians, after 6 January 2021. Akshy Sridhar has said that the service providers were given time till January 6 to provide details on the overhead cables drawn by them.

He told the council of the corporation that the service providers should remove such hanging cables posing danger to pedestrians and vehicles, on their own by January 6. The civic body will assess later how many of them are authorized ones and will jump into action. Some service providers, including telecom operators, have tied their cables to the electricity poles without the permission from the civic body. They should have obtained no objection from the corporation for them as the hanging cables posed danger to the lives of people in many places. On the other hand, the civic body too has lost revenue as the service providers have drawn their lines free. 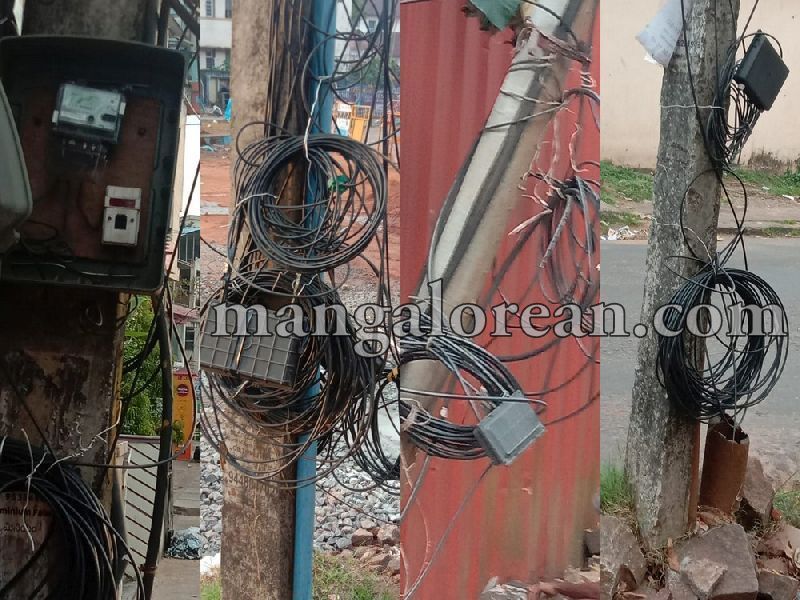 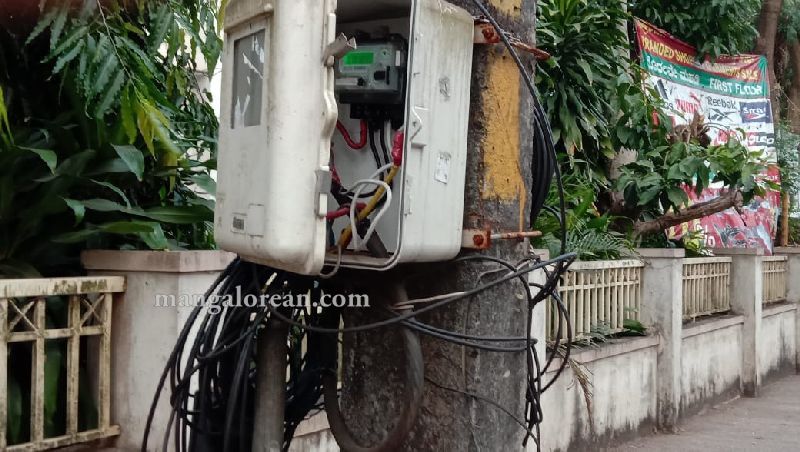 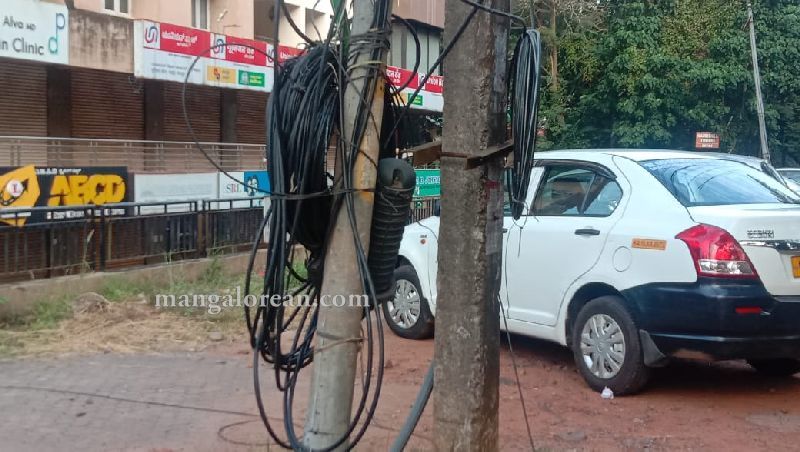 It should be noted that Corporator Naveen D’souza earlier had brought to the notice of MCC Council that some service providers , including telecom operators have tied (drawn) their cables to the Mescom poles without permission from the civic body. It is common to see bundles of cables put up to relay cable TV networks to the homes hanging from electric poles. One can also see black boxes attached to these cables. Many a times these cables snap and fall on the roads thus endangering the lives of road users specially the two-wheeler riders as the broken cables can get entangled to the wheels of the vehicles which can lead to accidents. 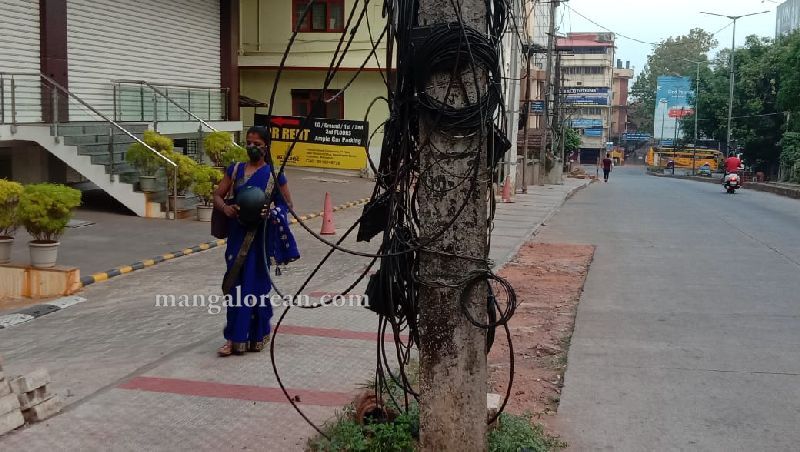 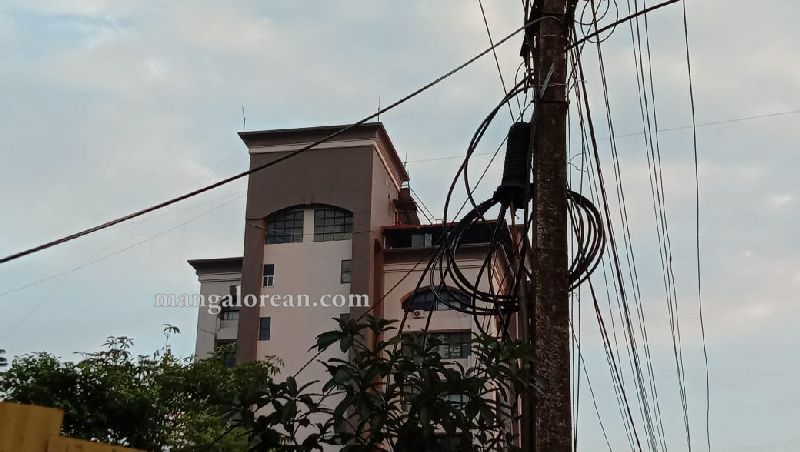 Cables are also seen tied to the trees along the roads and crisscross from one building to another. The problem arises when these cables snap and fall on the road. The cables also give a sore sight to the city as large bundles of these black cables along with boxes are seen hanging from electric poles. It is true that cable TV has brought entertainment and information into our homes. But then, it is also necessary for the cables to pass in an orderly manner so as not to endanger the lives of the citizens, specially the road users.

With the failure of the MESCOM electricity department to hammer out a solution to the illegal, arbitrary and unauthorized use of the department’s poles by cable television operators to provide satellite channels in the City, the overhanging wires continue to create public nuisance, besides posing threat to life and property. 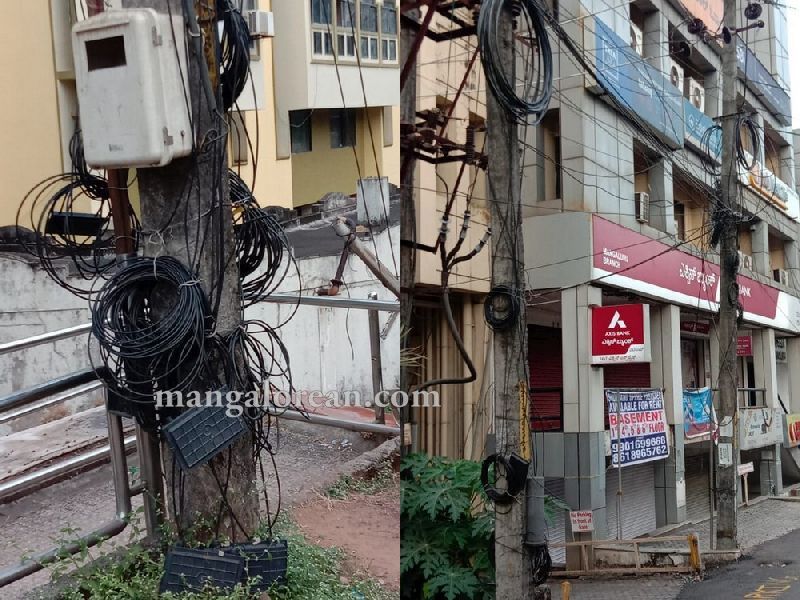 Lack of any regulatory authority combined with the government’s lethargy to impose restrictions on the reckless use of poles or levy fines on the erring operators has led to the rampant misuse of the government property. Besides, non-compliance of safety norms by the unregulated private sector cable network undertakings continuously pose grave danger to life and property.

Describing the danger to life on account of the haphazard pulling of wires over electric poles, one electrical engineer speaking to Team Mangalorean said , “Danger arises when the television cable and the live electricity cable, which run simultaneously over the pole, come in contact with each other. Several operators do not comply with safety standards. They should make use of insulated messenger wires. Instead they lay GI or metallic wires which are good conductors of electricity. The danger is aggravated especially when high tension conductors snap. Snapping of power lines may be at a far distance but since the television cable runs on the particular line which has snapped, the person handling the gadget at home may be electrocuted due to transmission of direct supply. And sometimes, such electric shocks are fatal in nature.”

Besides, the unsystematic network of wires creates a nuisance to the electricity staff while dealing with breakdowns, he added. “Many times the operators conveniently tie amplifiers to the poles for better reception. However, this causes major hassles to MESCOM staff whose work of identifying faults gets delayed, ultimately leading to public outcry. Linesmen first need to remove the amplifiers and ease out the web of wires to finally get down to work. The laying of the cable may result in excess load on the pole, thus resulting in a serious accident”. And it is seen in many places, few electric poles have tilted sideways due to the excess load of these TV Cables. Has anyone from MESCOM or MCC noticed it?

Nonetheless, the District Administration or MCC officials need to formulate a policy to restrict use of poles by either cable TV operators or telecommunication service providers in the interest of safety of the public. Seems like with a bunch of these loose TV Cables hanging on to the electric poles,there has never been any concrete consensus drawn to ease MESCOM poles of the web of wires of the operators despite the grave danger the wires pose to Mescom staff and public at large.

Nevertheless, concerned citizens are of the opinion that the government should initiate a crackdown as such use of poles is a gross violation of rules. Even though the local service providers have tied up with Mescom to provide Internet connections using electricity poles, but for the safety of the public, the electricity department should proceed with immediate removal, confiscation of the cable TV installed on such HT poles, towers, central verge poles and LT poles, as the department reserves its right to take appropriate legal action against such defaulters for non-compliance of its orders. Currently, local cable operators are providing Internet and cable services to nearly 15,000 plus houses and business establishments. The small players are already feeling the heat from big players due to competitive pricing.

In conclusion, as they say “Seeing Is Believing”, which means you need to see something before you can accept that it really occurs. Because we have seen in the past that whatever MCC officials promise to take action on civic action is never done or will take a long time for them to rectify or take action against the offenders.Therefore, it could be in this regard too-until we see action taken taken by MCC against these service providers, let’s keep our fingers crossed and wait for positive results.