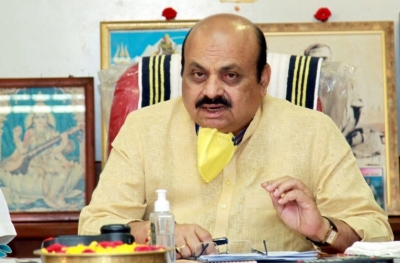 Mekedatu project: K’taka will fight it out legally, says minister

Bengaluru: Karnataka Law and Parliamentary Affairs Minister Basavaraj Bommai said on Monday that the state government will continue to fight for the implementation of the proposed Mekedatu balancing reservoir project across the Cauvery river in Ramanagara district leaglly.

The minister’s remarks assume significance after Tamil Nadu responded negatively to Karnataka Chief Minister B.S. Yediyurappa, who had on Saturday written a letter to his counterpart M.K. Stalin, urging him not to oppose the Mekedatu project “in the right spirit” besides offering to hold a bilateral meeting to address any issues.

“Tamil Nadu has always blindly opposed anything proposed by Karnataka. We will fight for our rights. Our rights will be restored,” he asserted.

Bommai said the proposed project is not new, but at least 4-5 decades old and will benefit both the states mutually as it uses the excess water of Cauvery river.

According to the minister, the proposed Mekedatu balancing river project will be undertaken within Karnataka’s boundary, and even the submerged areas will be within its territory. Moreover, it’s a drinking water project and will in no way affect Tamil Nadu’s share of water, he said.

“We are planning to utilise the surplus water after releasing their (Tamil Nadu’s) share, but still they have gone to the Supreme Court. I think Tamil Nadu’s opposition to the project stems from its political needs. A new government has just taken charge there, which is trying to make small things a bigger issue for its political needs,” he said.

Elaborating the reasons why Yediyurappa chose to write to his Tamil Nadu counterpart, Bommai said the letter was written in good faith expecting a apositive response, as the project is beneficial for both the states.

“Under the proposed Mekedatu balancing river project, Karnataka will get drinking water while the surplus water stored will also help Tamil Nadu at times of distress. Besides, the power generated can be used by both the states which is nothing but a win-win situation for both, but Tamil Nadu has as usual decided to oppose the project. They have even filed a case in the Supreme Court, but our lawyers are effectively countering them,” Bommai said in response to a question.

The proposed Mekedatu project is a balancing reservoir project across the Cauvery river. Mekedatu, which means goat’s leap, is a deep gorge situated at the confluence of Cauvery and its tributary Arkavathi in Kanakapura taluk of Ramanagar district.

The project aims to store and supply water for drinking purposes to Bengaluru city. Around 400 megawatts (MW) of power is also proposed to be generated through the project, which was announced by Karnataka in 2013.

On June 18, Stalin had opposed the project when Yediyurappa had Tweeted that the state is gearing up to start work on the Mekedatu project.

The sharing of water of the Cauvery river has been the source of serious conflict between the two neighbouring states for ages.

The genesis of the Cauvery river water dispute can be traced to two agreements of 1892 and 1924 reached between the Madras Presidency and the Kingdom of Mysore.