Kuwait: Tulu Koota Kuwait (TKK) led by the charismatic president, Mr Sanath Shetty organized the 23rd year’s Tulu Parba at the American International School Auditorium, Maidan Hawally, Kuwait recently. The ‘Bharath Varsha’, a grand dance drama with over 180 participants on stage, and the comedy-drama “Adhyaksher” by the Ranga Taranga team from Kaup were the major attractions of the annual event. 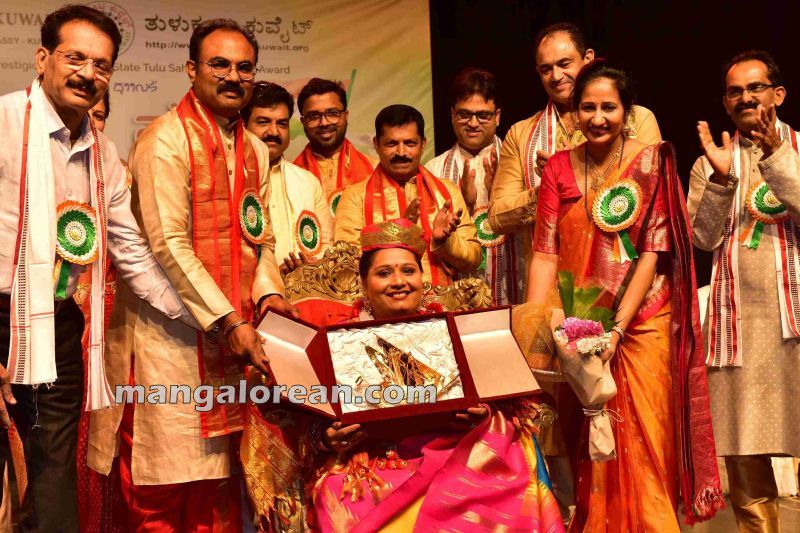 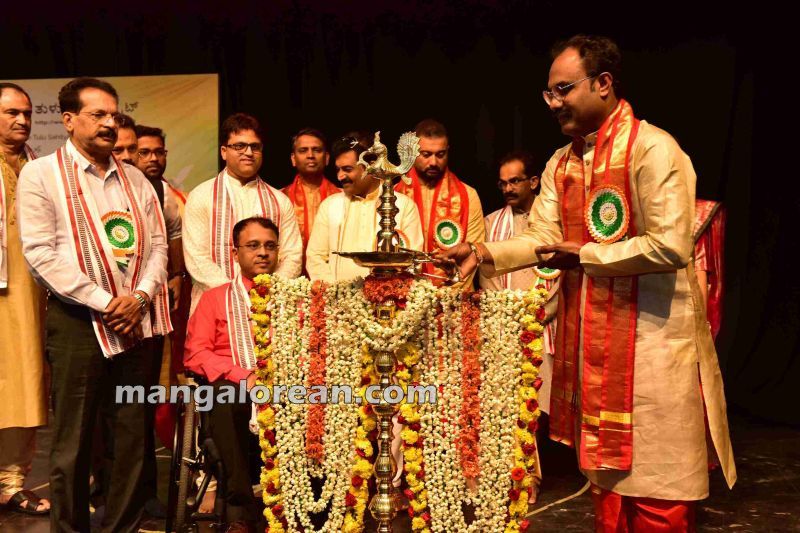 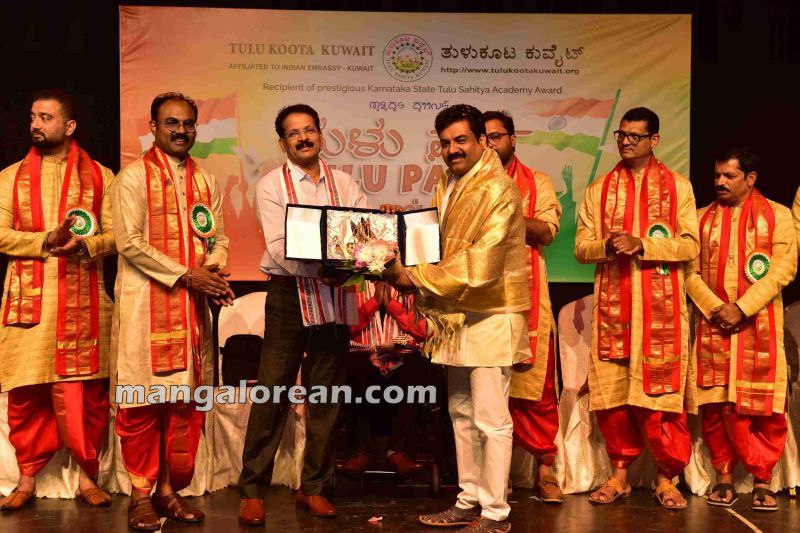 A souvenir of Tulu Parba 2022 was released and a classical welcome dance was performed by the disciples of Swastika Bharathanatyam dance academy, choreographed by Dr Vaishnavi Swaminathan. Mr Sanath Shetty welcomed the audience, sponsors, and members and briefed the achievements and the activities of the association. He thanked all the past presidents, members, and those who have been actively involved in the activities of TKK for their continuous support in keeping the Tulu Koota flag always high, both on the cultural front and in philanthropic deeds. He mentioned the list of philanthropic and welfare activities carried out during the year. He also thanked all the event sponsors, well-wishers, committee members, and supporters of Tulu Koota Kuwait.

The stage program began with the felicitation of sponsors who were the main pillars behind the success of any activities of Tulu Koota Kuwait. The sponsors were honoured with a flower bouquet and memento as a token of gratitude for their support to Tulu Koota Kuwait. 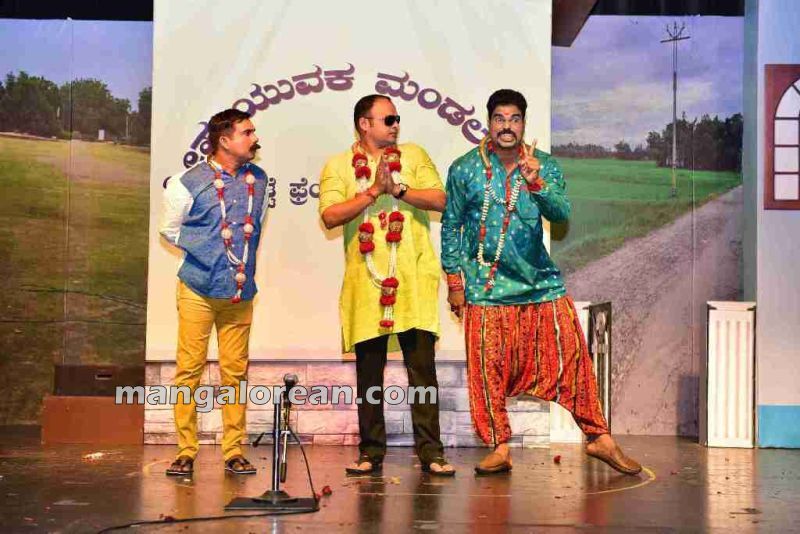 Academic excellence award with certificates and scholarships was presented to deserving candidates who have completed their classes X and XII successfully in the year 2022. TKK continued its tradition of honouring the committee members for their hard work and consistent contributions. This year TKK members Dr Preethi Shetty and Mr Jagadeeshwar Shanubhaug were felicitated for their dedication and selfless service for several years to the association. The program continued with the felicitation to the guest compere Dr Priya Harish. Further, Mr James Paul, Mr Satish Acharya, and Mr Abdllah Sheikh of Akbar Travels were honoured for their contribution and service. In the same event, Mr Gokuldas Bhat, and Mr Abdul Razak were honoured for their service towards the Koota. The guest of Honor for the day Mr Rayan Fernandes and the Chief guest Dr Thukaram Poojary were honoured with the traditional cap, shawl, garland, fruits, and memento. They appreciated the philanthropic and welfare activity of Tulukoota Kuwait and wished all the best for TKK’s future endeavours and effortless service of TKK. Meanwhile, TKK contributed Rs. 1,00,000 to Rani Abbakka Tulu Study Center & Tulu Baduku Museum, Bantwal, and Sevedhama, Rehabilitation Center, Belthangady to fulfil and continue their ambitious goals and endeavours in their respective association back in India. 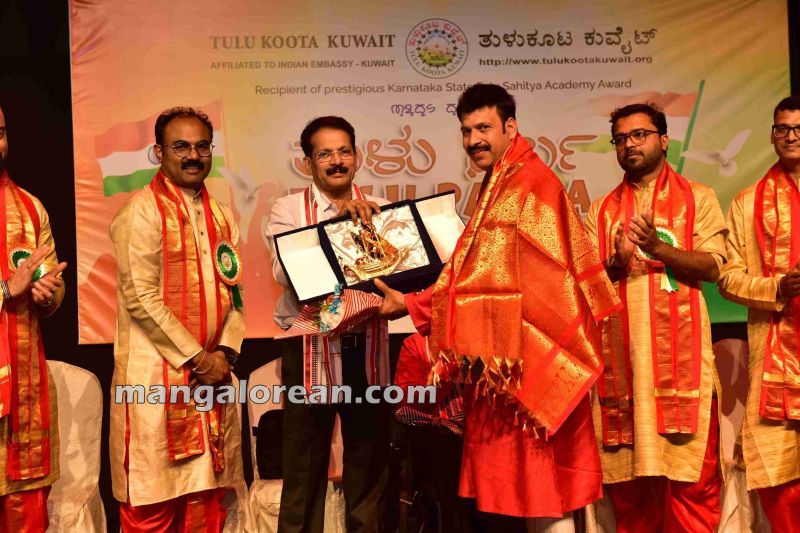 Dr Thukarama Poojary in his speech appreciated the work of TKK and was spellbound by the traditional Tulanadu Kalase and Mudi on the stage which was used for the inaugural and detailed the disappearance of such valuable traditional assets which have been used for centuries and not to be seen by the new generations. He also mentioned the glorious history of Rani Abbaka and the importance of the Rani Abbakka museum at BC road, Bantwal, and invited all Tuluvas to visit the museum, where more than 4,000 traditional bygone artefacts can be seen. He also stressed the importance of the Tulu language and its inclusion in the 8th schedule of the Indian Constitution.

The Bharatha Varsha performance by the Tulu Koota Kuwait members was the main attraction of the event, where more than 180 participants performed on stage with a variety of programs depicting the rich cultural heritage of India from North to South and East to West. The story was a journey of a soldier with a tribute to all soldiers and freedom fighters on the eve of Azadi ka Amrit Mahotsav. The key person behind this program was Mr Suresh Salian with the concept, choreography, and direction. The script and dialogues were written by Mr Tharendra P Shettigar, with technical support from Mr Jagadeeshwara Shanubogue. The Bharatha Varsha was well-executed by the coordinated work of the various committee members, Mr Abdul Razak, Vanitha VK, Babitha Shetty, Sushma Manoj, Ashwitha Poojary, Violet, Veera D’Souza, Dinesh Ram, Shudan Shettigar, Suresh Kunder, Anil Britto, Vishu Shetty, Dushyanth Shetty, Jackson D’Sa, Veera D’Souza, etc. The dance drama showcased more than 180 artists, with a blend of 35 scenes depicting cultures, occupations, performances, religious rituals, folk dances, and glimpses of heroic freedom fighters, to name a few. A grandeur performance mesmerized the audience for nearly one and half hours and culminated with honouring the key persons behind the making of this Bharatha Varsha – Mr Suresh Salian, Mr Tharendra Shettigar, Mr Jagadeeshwara Shanubogue. The various dance groups Ms Sharanya & Team-Taal Academy, Ms Renu Grover & Team- Gracefulmoves Academy, Mr Nitin & Team -Somyntra Dance & Fitness, KMS Kalari Academy, and Nrityanjali Dance Studio were felicitated with a memento for being part of the event.

The presentation on the welfare activities prepared by the welfare officer Mr Vijay Wilson Albuquerque with the support of TKK members was displayed, depicting the various philanthropic activities of the association. General Secretary Mr Roshan Quadras rendered the vote of thanks.

The main attraction of the day was the Tulu drama “Adhyaksher” by the “KaupRanga Taranga” group led by Samaj Ratna Mr Leeladhar Shetty. A team of famous celebrated artists, Sharath Kumar Uchila, Prasanna Kumar Bailoor, Sujith Shetty, Sandeep K Shetty, Deepak Ganiga, Harish Kotian, Merwyn Aranha, Praveen B Poojary, Raguraja Poojary, Rajesh Kottary, Shivaprakash Poonja, Srinivasa Acharya, Yashawanth Poojary, Pooja M Poojary, Bhagyashree R Kamath, and Sowmya P Poojary presented the super hit drama. It was directed by Sharath Uchila, written by Prasanna Shetty Bailur, and the music was provided by Deepak Ganiga Malali. The audience went into roars of laughter and sat through the end of the drama enjoying every bit of the show. At the end of the show, the artists were honoured with the presentation of mementoes.

The entire event was well coordinated by the cultural secretary, Mr Manoj Shetty, with active support from the TKK advisors, the management committee, and all committee members. The sound and lights for the event were provided by Waves Events & Rentals, photography & videography by Alban D’Souza, slides by Jagdeesh Shanobouge and Aravind Bhandari, Stage setting by Ronald D’Souza and Satish Acharya, make-up by Shaji Sebastian, Gopal, Libin, Deepu and Rena Raj and the souvenir artwork designed by Manoj Kumar. The event was well compered by anchor Dr Priya Harish and Harish Bhandary. The audience was provided with snack boxes at the end of the event. Overall, it was a remarkable evening with a fully packed auditorium, with the live celebrations happening after a break of two years.