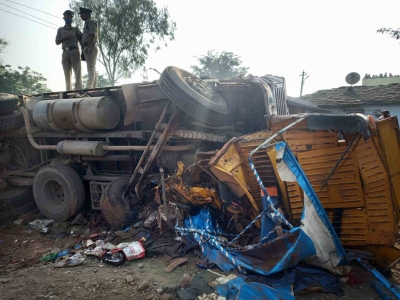 Nellore:  A mini truck carrying labourers was hit by a speeding milk van in Andhra Pradesh’s Nellore district early Tuesday leading to the death of five people and injuring four others.

One of the injured in the Duvvuru area accident is reported to be serious.

The mini truck was heading to Vidavaluru from Duvvuru, carrying labourers for fishing and the accident occurred when they were getting onboard.

Police shifted the injured persons to Bucchi and Nellore hospitals.

Industries Minister Mekapati Goutham Reddy expressed his condolences and said the government will reach out to the victims’ families.

Governor Biswa Bhusan Harichandan expressed shock and profound grief at the road accident on the national highway at Duvvuru in Sangam mandal. He wished the injured speedy recovery.