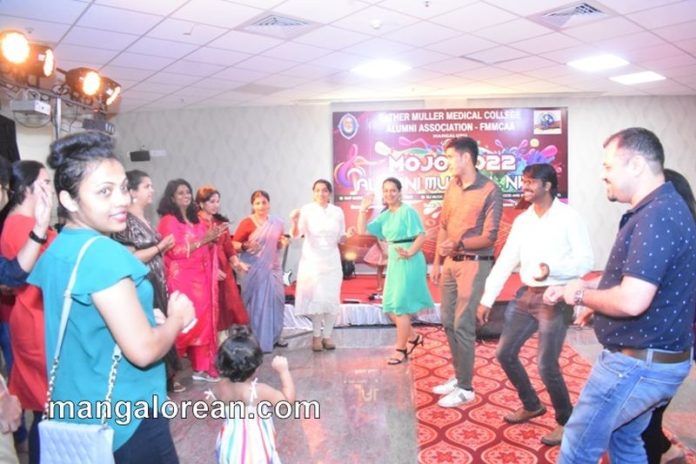 Without Music, Life Would Be A Mistake. Music Gives A Soul To The Universe, Wings To The Mind, Flight To The Imagination And Life To Everything. Music Is A Language That Doesn’t Speak Particular Words. It Speaks In Emotions, And If It’s In The Bones, It’s In The Bones. Music In Itself Is Healing. It’s An Explosive Expression Of Humanity. It’s Something We Are All Touched By. No Matter What Culture We’re From, Everyone Loves Music. Music Produces A Kind Of Pleasure That Human Nature Cannot Do Without. Music Is To The Soul And Words Are To The Mind. Music Is The Literature Of The Heart; It Commences Where Speech Ends

Mangaluru: ‘MOJO 2022’– Alumni Musical Nite organised by Father Muller Medical College Alumni Association in aid of Dialysis and FMCI Welfare Fund, where the Alumni of Father Muller Medical College Hospital, Kankanady, Mangaluru joined together for a great experience with a host of musical stars was an unforgettable event, and a Total BLAST! The musical extravaganza was held on Wednesday, 23 November 2022 at the Father Muller Convention Centre Mini Hall, which commenced at 6 pm and lasted till 11 pm. 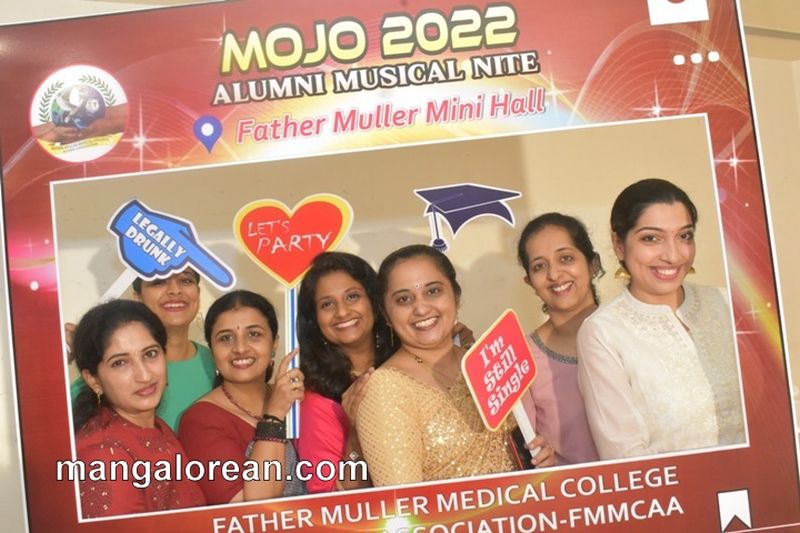 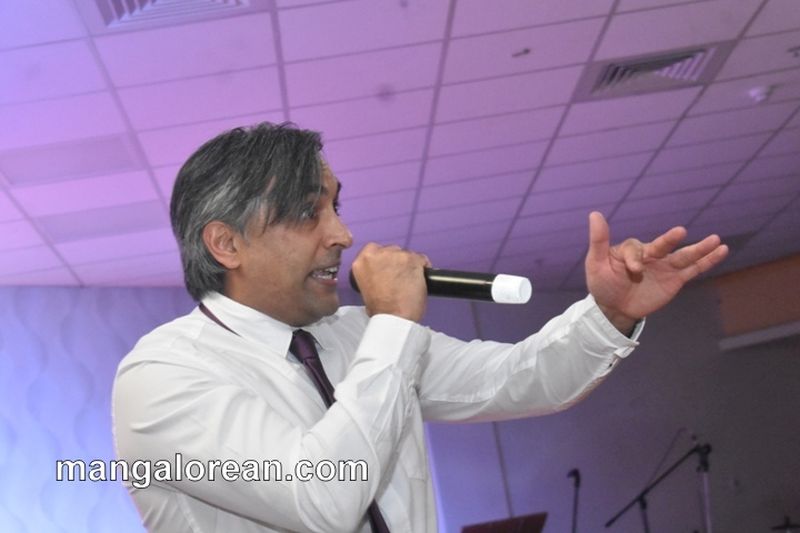 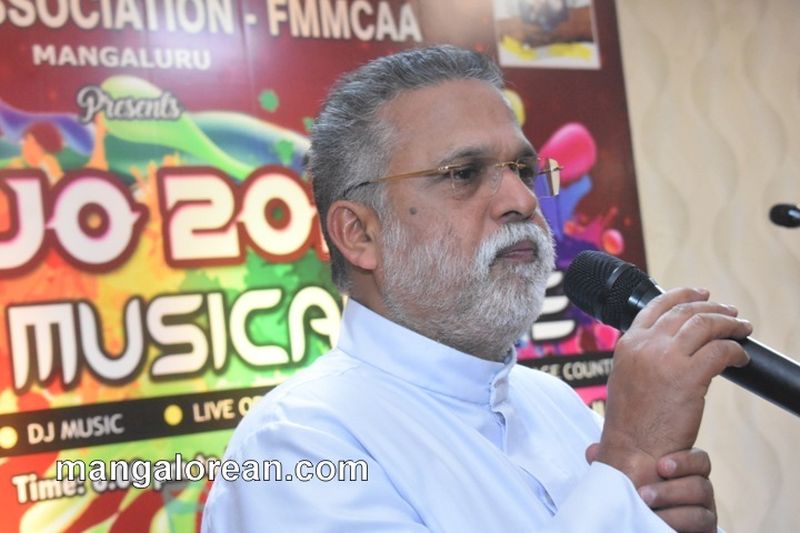 Mangaluru: “Music is the strongest form of magic”- as said by American singer/rocker Marilyn Manson has very effectively cemented this long-standing idea through his thought that music has stood undefeated and glorious since time immemorial. Indeed, music can take us to another zone, a zone that is free from the inevitable sadness and trauma that life offers us otherwise. It has the inexplicable power to unite people from all walks of life, regardless of how different a life each person lives. And after all, at the end of the day, it all boils down to the music that we can relate to, music that makes us feel a certain way that cannot be put into words, music that goes through the ears but straight to the heart and music that makes us feel like we’ve run from home, without even leaving it. And that, indeed, is magic.

And for that matter, Father Muller Medical College Alumni Association hosted a maiden event ‘ MOJO 2022- Alumni Musical Nite which was dedicated to letting go of everything and drowning in the ocean of pure rhythm, beats, and melody as budding musicians “Unleashed The Power of Music” at this musical extravaganza. As Aldous Huxley puts it “After silence, that which comes nearest to expressing the inexpressible is music”.“Next to the word of God, the noble art of music is the greatest treasure in the world”- says Martin Luther King. Just like the evening which was bright and welcoming, so was the audience filled with a bright passion for music. 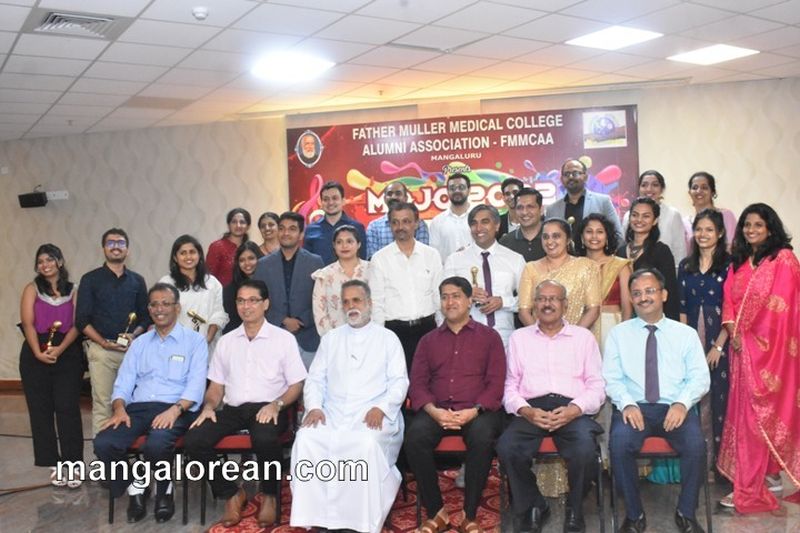 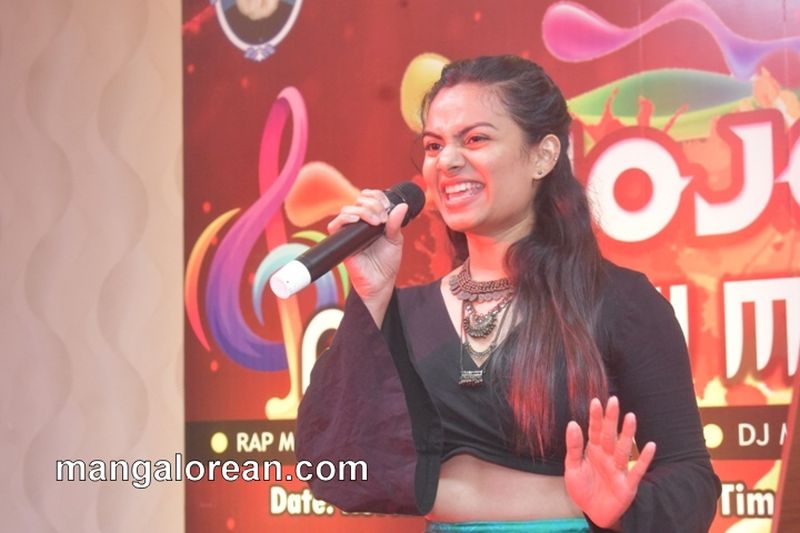 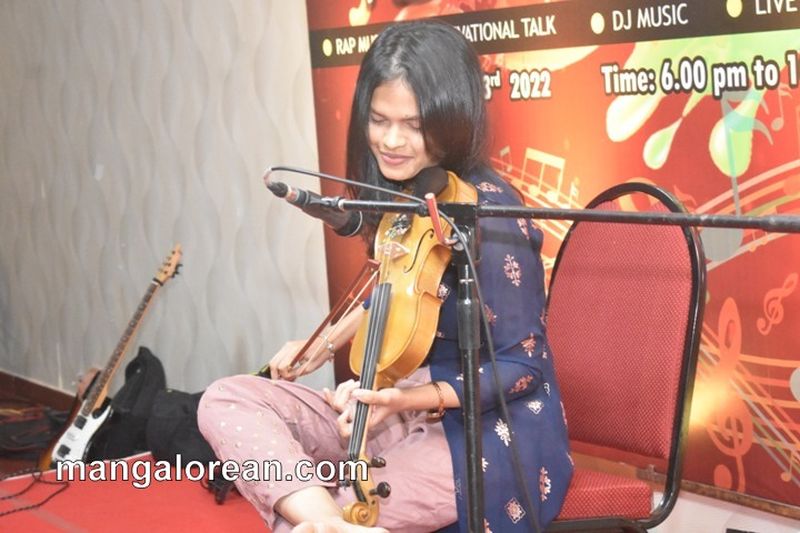 The first performing duo of the Nite were Dr Prashanth Puthran, an 2004-2009 MBBS graduate from Father Mullers, and an MD in anaesthesia residing in Bengaluru, along with Dr Venugopala Rao Bhagavathula, Former head of the department of Anatomy, FMMC (nephew of Music director Chellapilla Satyam), and presently a Professor of forensic medicine, Kanachur Medical College, Deralakatte, Mangaluru, gave a mesmerizing performance with a choice of songs (oldies) which was timeless and beautifully executed.

Then followed a wonderful performance by a couple of budding artistes-It would be wrong to call them budding because both the artists have been learning music since they were three and four years old Dr Haritha Bhat currently interning at FMMC started learning music at the age of 5, trained in Carnatic Classical music for 13 years resulting in widespread interest in music and dance and art. And with her was Dr Ann Elsa, learning music at age 3. Carnatic music, and also plays guitar, keyboard, and ukulele. Has written her music and has been conducting classes- Western, and Hindustani.

The STAR attraction of the NITE was the Band ROUTE 96′ comprising five young guys Rynel, Sanjay, Roshan, Melroy and Sanjeev. In 2022, these 5 accomplished musicians, armed with nothing more than their passion for music, amalgamated to form a band under the banner “Route 96”, a multi-genre cover band, hailing from Mangaluru, trending for its versatility and known to bring all crowds to life. After entertaining crowds for over a decade in different bands- Route 96 came together to enthral everyone with particularly “Tasteful Music”. With their unique style of music and engagement the listeners, always bring the house down anywhere they perform. It is because of this very appeal that Route 96 is becoming a force to reckon with. The band performs all genres of music – right from classic ’60s to modern-day pop, rock, swing, country, disco, reggae, jive, & some other great ballroom dance music, with a twist in style. Besides English, they also perform contemporary tracks from Bollywood & traditional Konkani music of Mangaluru and Goa, popularly termed “Baila.”- and that’s exactly what they did at the MOJO 2022. 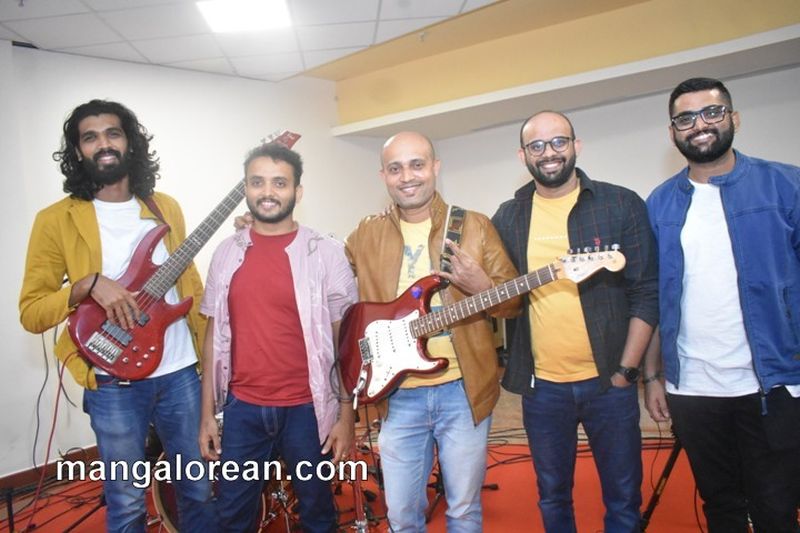 Yet another special attraction of the Nite was Dr Dhruva Gulur, an MBBS 1999 batch of FMMC, now a board-certified family doctor, Mindfulness-Based Stress Reduction (MBSR) certified mindfulness expert & certified life coach based in Seattle, USA, he has a mission to provide tools that empower others to ignite their passion and unleash their potential within to be the greatest version of themselves. This is based on the practice of mindfulness. Mythologically speaking, performing a speaking and rap set based on the Power of Self-Belief through Mind Hygiene. He enthralled and mesmerized the audience with his unique performance, which called for encores.

Now it was time for the Director of Father Muller Charitable Institutions, Fr Richard Coelho who appreciated and expressed his gratitude to the Alumni of FMMC for organizing this fundraiser event for a good cause. The Director also felicitated the performers of the Nite, and other past faculty of FMMC, including Deans with mementoes. Then followed by a performance by a duo of dermatologists, Dr Sukumar D, professor and former HOD of Dept. of dermatology who passed out of MD dermatology in 1998 at FMMC; and by Vice Dean of FMMC, Dr Ramesh Bhat, who the MC named him as JB 007! 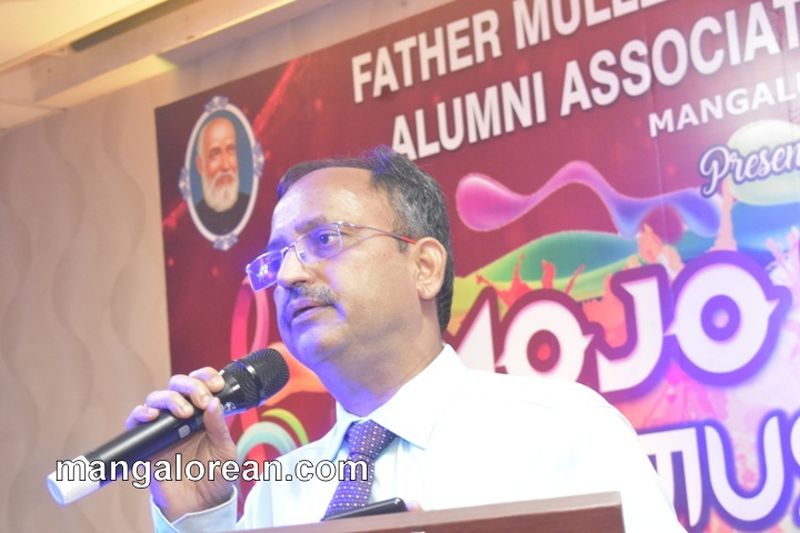 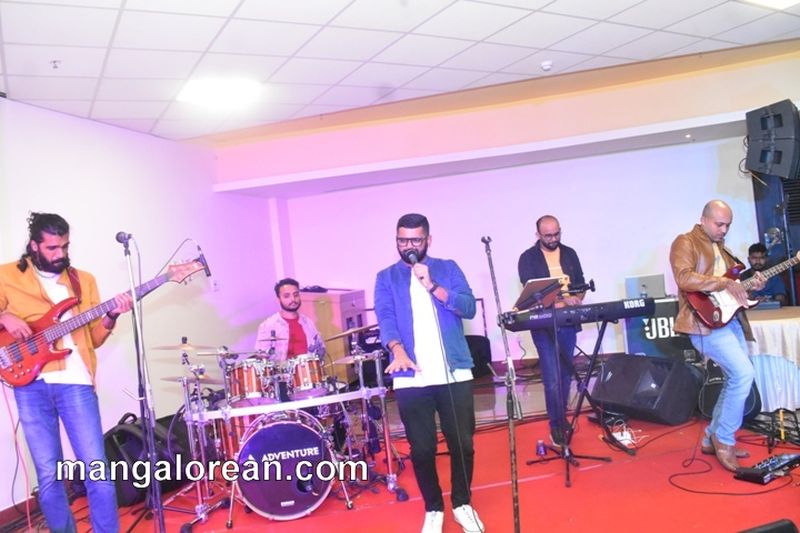 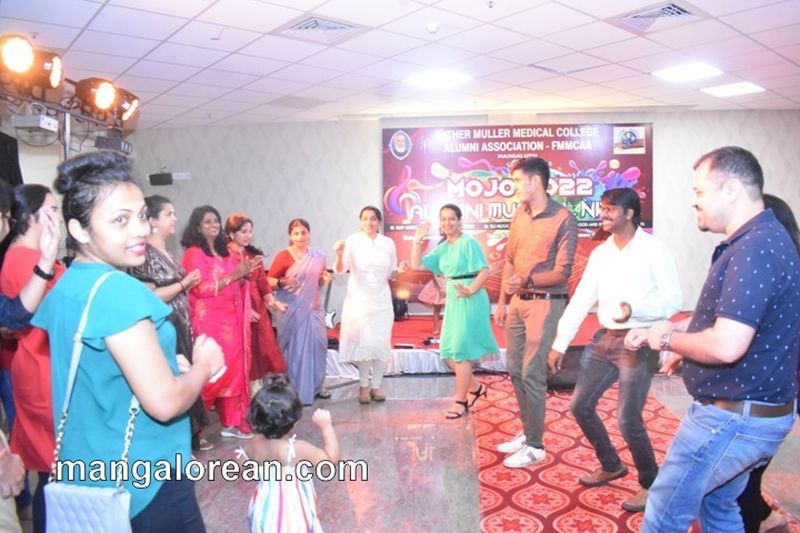 Dr Vishaka playing the Soulful violin to background music got loud applause from the audience. Dr Anvith Pinto, who was one of the MCs, also sang a solo using his box guitar, followed by a performance by Dr Deborah of FMMC, accompanied by Band Route 96′. Then came the Mashup by Dr Deborah, Dr Aishwarya, and Dr Tia, which led a few of the revellers to step up on the dance floor, to exhibit their body moves and hip shaking. Dance by Lakshmi- an alumnus of speech and language pathologist, a professional dancer and choreographer, known to virtually every person in Father Muller, gave a sizzling performance.

Dr Lenon and Dr Janine of FMMC sang a couple of Western songs; and yet another passionate singer, Anrick Savio Menezes Bpt Batch 2017, currently doing a Master’s in Physiotherapy (MPT) in FMMC in Musculoskeletal Speciality rendered a couple of songs, including a Konkani song, backed up by Band Route 96. Ms Ninoshka Mascarenhas currently doing a Master’s in Physiotherapy (MPT) in FMMC in Musculoskeletal Speciality, has a sweet sweet smile and sang two songs. Duo Sydney Rebello of MPT batch 2007 FMMC, currently working as professor in the dept. of physiotherapy at FMMC, who is into classic rock and metal, along with Nabeel, a PG from FMMCH 2011-2013 batch, who is specialised in sports medicine and musculoskeletal disorders, based in Bengaluru, has an own band called “Who Needs a Dj !? “and created two albums for Sakra World hospital, Bengaluru, been into music since 33 years- both of them rocked the stage in their unique style. Sydney and Nabeel simply rocked! And the Musical bash ended with mesmerizing dance numbers by Band Route 96, including Bailas, and the dance floor was packed with revellers, both men and women, including kids. Dr Reshma Kini and Dr Anvith Pinto eloquently and meticulously compared the entire showbiz. 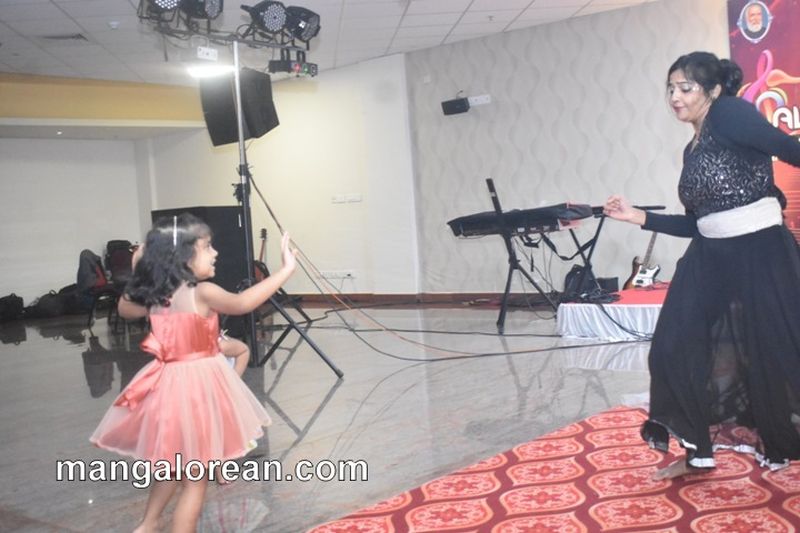 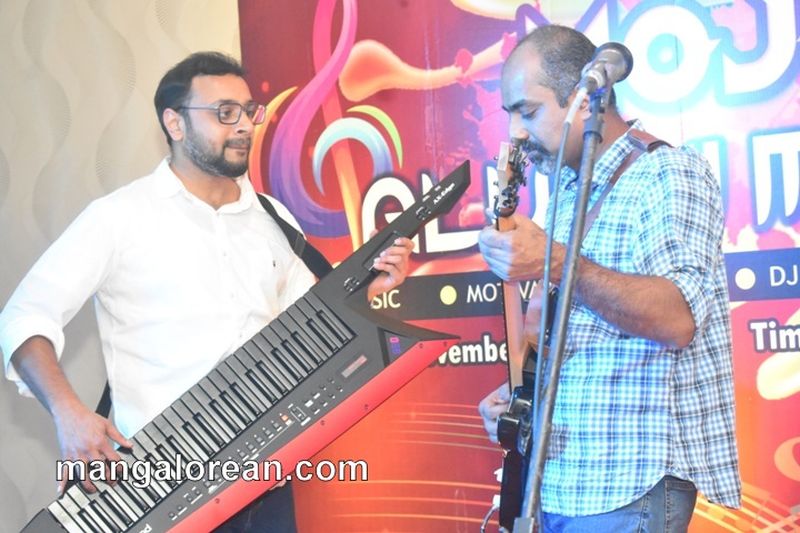 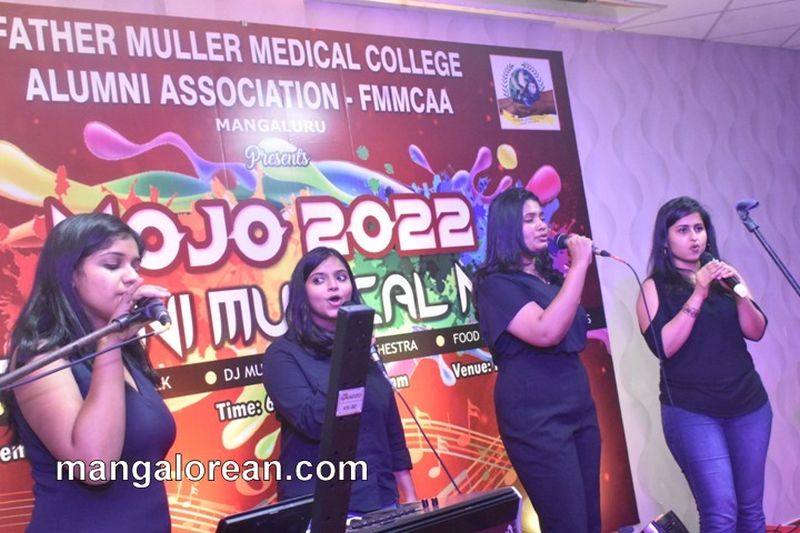 Truly, Music is food for the soul. When all the notes come together, there is a symphony and rhythm and this vibration brings together all cultures, religions and languages and makes us united as one Nation. Music is the language of the spirit. It opens the secret of life bringing peace, abolishing strife- and will help dissolve your perplexities and purify your character and sensibilities, and in times of care and sorrow, will keep a fountain of joy alive in you. Music unites people, and it is an incredible force. Something that people who differ on everything and anything else can have in common. Have fun during this musical extravaganza. And all this was seen at MOJO 2022, one of the Best Musical Extravaganza ever seen on the FMMC campus. Great job by the Alumni of FMMC!