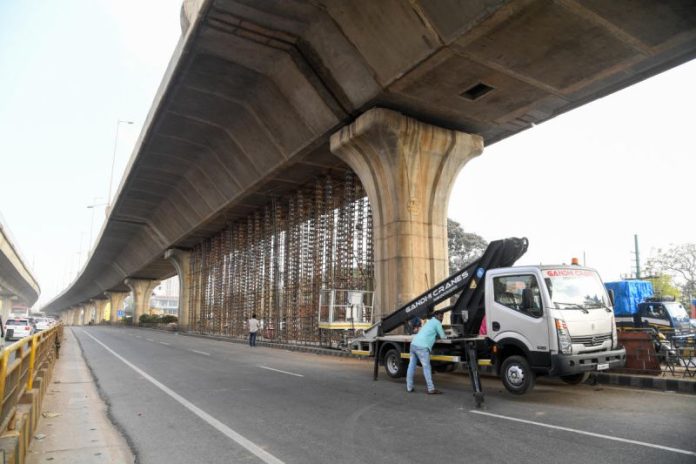 Morbi revives fears in Bengaluru about snags in city’s flyovers

Bengaluru: The major newly-built bridges in Bengaluru, known as Silicon Valley of India and boasting of being a global city, developed various snags and were closed for months for repairs, leading to opposition leaders and activists alike raising safety concerns in wake of the Morbi bridge tragedy in Gujarat.

Fingers are being pointed at the quality of repair works conducted on the Peenya elevated highway, and the Sumanahalli, Shivanagar, and Shivananda flyovers, with activists claiming that they have seen mediocre work by not only the agencies of the state government, but also with those of the National Highway Authority of India (NHAI).

The Peenya elevated highway, which serves as the gateway to entire north Karnataka, remained closed after it was found to need major repair work. Other bridges were also closed for repairs, raising suspicions on the quality of work on them.

The NHAI had stated that the Peenya flyover was closed on the elevated highway following the detection of two rusted cables between pillars no 102 and 103. NHAI Regional Officer, Karnataka, Akil Ahmed stated two of the pre-stressed concrete cables out of 20 had rusted due to heavy rain. He also stated that they did not know when it happened, but were taking immediate action.

Talking to IANS, Karnataka State Motorists Association (KSMA) Vice President, and Congress spokesperson M.G. Sudheendra said: “Trust me, disaster is waiting to happen in Bengaluru. It can be me or anyone, whoever it is you can never know. It is our luck that nothing has happened till date..”

“I can name four flyovers which seem to be dangerous in Bengaluru. Out of four, two bridges have been inaugurated in the last six months. Two inaugurated earlier, but still in their usable period, developed major snags and were closed for traffic.

“Where are we heading? The authorities have zero regard for the safety of people. Fortunately we have not seen any incidents, are we waiting for a Morbi-like tragedy to happen here? We don’t know. Only luck is saving us,” he claimed.

“The Peenya flyover is reopened only for light and medium vehicles now. This has happened soon after it was built. The government has not dared or tried to look as to why this is happened,” Sudheendra said, adding that the toll is being collected, the contract is given to private parties, and on top of it, there is mediocre work which puts people’s lives in danger.

“Cable has corroded, says the report. NHAI found faults in the cable in two spans of five kilometers where at two spots, cables have corroded. This cable has to be corrosion proof for 50 years… how can it get corroded?” he asked.

“The entire flyover is held by a heavy duty cable. It is to be rust-proof, corrosion-proof and all weather-proof. Reports are finding fault in that cable which holds the flyover. There should not have been any problem for the next 100 years,” he said.

“Unfortunately, this is not the only case. Sumanahalli flyover has developed a hole on one side. Shivanahalli, or Shivanagar Bridge, on west of Chord Road, inaugurated by Chief Minister Basavaraj Bommai four months ago, was closed for two months for repair.

“If one-way traffic is closed for a long period, at least let the people know why, what is the repair? The bridge looked all fine. Small maintenance is okay. What does two months’ repair mean?” Sudheendra asked.

“If one flyover is built, it should hold well without service for 40 years. After 40 years, servicing starts, the life is extended for another 20 years. But, here in Bengaluru, within 6 months, the flyover is closed for two months for repair, what are you doing?

“Safety of commuters is zero. All you want is some kind of PR show during inaugurations. We are on the verge of a tragedy. A tragedy will have to take place for the people or authorities to wake up here.

“They should conduct an independent audit. I am not for the audits conducted by the PWD or the NHAI. Both are corrupt. It is like I am inspecting my own work. If I am to correct my own answer paper, I will get 100 per cent marks. The system is like that, the NHAI audits the PWD and the PWD is audited by the NHAI,” he said, demanding that structural audits should be given to independent audit companies like KPMG or others, which also have citizen partnerships but not in the form of relatives of local elected representatives.

Karnataka Motorists Association President Raghavendra H.S. opined that they had come across substandard work by local civic and state agencies, and “now, it is being seen with the NHAI also”.

“Peenya elevated highway was built by the NHAI as per the standards of the Indian Road Congress. Whom should we look up to?” he questioned.

“It is a complete failure of the Central government and the NHAI. The contractor should be held responsible if the bridge has to be rebuilt. There are lakhs of bridges, in hilly regions of the state, which are in bad shape and need the attention of authorities,” he added.

“If patch work continues, the quality of the bridge will get compromised without any doubt. There are all possibilities of Peenya elevated highway collapsing like Gujarat’s Morbi Bridge. The bridge should be demolished and rebuilt by the same contractor who had done sub-standard work. The government is not at all talking about this,” he alleged.