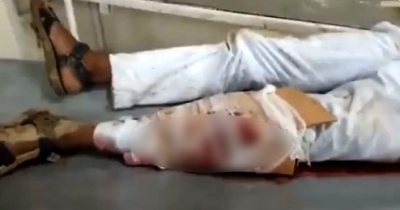 Bhopal: In a shocking incident, a cardboard was used by the medical staff at a hospital in Madhya Pradesh’s Bhind district in place of the Plaster of Paris bandage to dress up the fractured leg of a patient.

A video that surfaced on the social media shows a cardboard tied around a man’s leg. Surprisingly, the medical staff defended the usage of the cardboard, saying “it was done to give support to the fractured leg and stop bleeding”.

The man was rushed to the hospital after he injured his leg in a road accident.

Later, it emerged that the health staff used the cardboard as Plaster of Paris bandage — usually used on fractured limb — was not available at the health centre.

According to sources, due to unavailability of the regular plasters, the medical staff often use cardboard as temporary bandage when injured persons are brought to the hospital.

“This particular incident was revealed as a video surfaced on social media but such episodes have occurred earlier as well. The doctor or other health staff should not be blamed for such things because they provide treatment without having proper facilities. If plaster bandage was not available, it is not the staff’s mistake. Question should never raised against those are responsible to provide medical kits to the hospital and management of the hospital,” said a medical staff requesting anonymity.