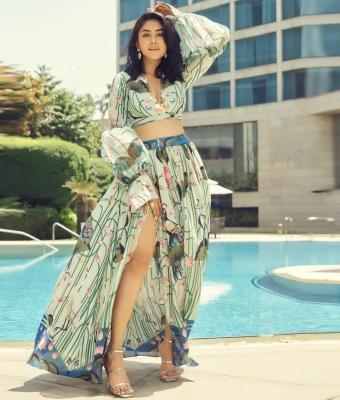 New Delhi: Actress Mrunal Thakur is overjoyed to work with the National Award-winning filmmaker Rakeysh Omprakash Mehra in the upcoming boxing drama “Toofaan”, starring Farhan Akhtar. She says playing Ananya in the film has made her strong and confident.

Having a conversation about working with Mehra, whose “Rang De Basanti” earned him a National Film Award as well as a BAFTA nomination for Best Foreign Language Film, and who also made “Bhaag Milkha Bhaag” among other films, Mrunal is overwhelmed.

“I think this is one of the most Toofani moments I am having. It’s my fourth film and I got a chance to work with Rakeysh sir,” Mrunal told IANS.

“I think all the other actresses are going to be jealous and I feel lucky,” the actress quipped, adding the film was an “overwhelming process”.

She added: “I have learned a lot. Ananya (her character) has made Mrunal so strong and confident, and as a human also I feel I am that catalyst when it comes to my family.”

“Toofaan” is the story of a boxer played by Farhan Akhtar, who pushes his limits and works hard to win. The film is slated to release on Amazon Prime Video on July 16.