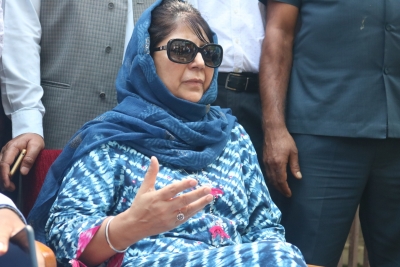 Jammu: Former Jammu and Kashmir Chief Minister and president of the Peoples Democratic Party (PDP), Mehbooba Mufti, on Saturday questioned the right of the local counter intelligence wing to arrest PDP leader Waheed Para after he was granted bail by a National Investigation Agency (NIA) court.

PDP Youth president Waheed Para was granted bail by the NIA designate court in Jammu on Saturday. Reports said that soon after his release, Para was detained by the local counter intelligence wing for questioning.

“Despite NIA Court granting bail to @parawahid after thorough court proceedings, he has now been detained by CIK in Jammu. Under what law & for what crime has he been arrested? This is brazen contempt of court. Request @manojsinha_ji to intervene so that justice is served,” Mufti tweeted.

Para was arrested by the NIA in 2020 on charges of being associated with funding of terror outfit Hizbul Mujahideen.

He was also accused of having close links with the dismissed Deputy Superintendent of Police, Davinder Singh, and two of his terror associates, Irfan Shafi Mir and Naveed Babu.

The NIA court had sent Para to 30-day judicial remand on December 20. His house was also raided by the counter intelligence wing of J&K police on December 30 in Pulwama district.

NIA has accused Para of being part of a terror funding nexus along with Davinder Singh and two other terror associations.

Para won in the District Development Council (DDC) polls held in 2020 but was not allowed to take oath as he was in judicial remand.