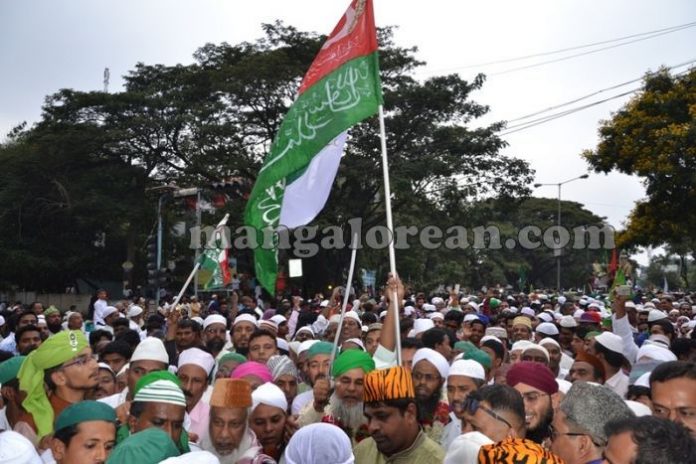 Shivamogga: Many Muslims in India observe Milad-un-Nabi, which commemorates the birthday of Prophet Muhammad. Milad-un-Nabi is a gazetted holiday in India and is also known as Nabi Day, Mawlid, Mohammad’s Birthday or the Prophet’s Birthday.

Milaad-un-Nabi was celebrated in Shivamogga on Dec 2nd 2017. The procession began at around 3:00 pm from the Jamia Masjid, thousands of people took part in the procession which passed through the city’s streets.

It is a day to remember the teachings and kindness of the Prophet. The faithful observe his birthday out of a desire to show their love and reverence to the Prophet.

MLA K B Prasanna Kumar and prominent personalities joined the procession and wished all Eid Milaad, a huge crowd was seen on the streets, especially women and children who were excited, soft drinks coffee and Tea was served throughout the procession.

On Milad-un-Nabi day, Muslim brethren carry green flags or banners and wear green ribbons while taking part in the procession. The green colour represents Islam and paradise. Thousands of people attend prayers at the shrine on the night before Milad-un-Nabi. The relic is displayed in the Mosque after the morning prayers. In the evening the relic will be paraded throughout the city.