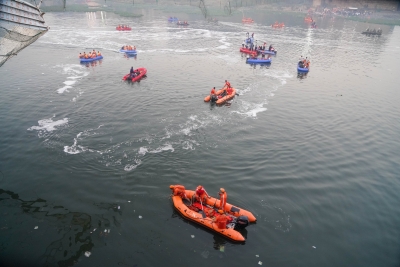 My heart goes out to victims of Morbi tragedy: PM Modi

Rajpipla (Gujarat): Prime Minister Narendra Modi said he was pained by the tragedy of the Morbi bridge collapse in which 141 people were killed.

He was here to pay floral tributes to Sardar Vallabhbhai Patel on his birth anniversary at the Statue of Unity on Monday.

“My heart goes out to the Morbi bridge collapse victims. In my life I have rarely experienced such pain. I am at Ekta Nagar but my heart and mind are with the victims,” Modi said while addressing a gathering in Ekta Nagar.

He added, “On one hand my heart is in pain and on the other hand I have to discharge my duty. I pay condolences to those who have lost their lives in the accident and share grief and sorrows of the families.”

The state government swung into immediate action after the bridge collapsed. Along with the state machinery, even NDRF teams and other agencies joined hands in rescue and search operations, the Prime Minister said, adding that the Central government will extend all support to the state government.

The Prime Minister assured that all those responsible for the negligence would be brought to justice and no one will be spared. The state government has formed a probe panel and will investigate the accident.