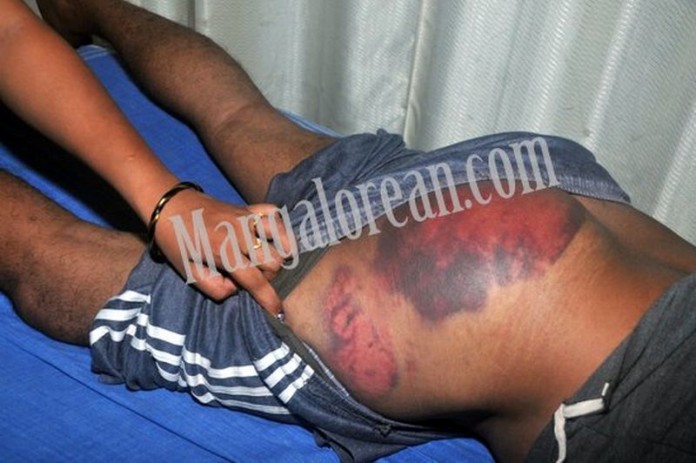 Mangalore: My Husband was Assaulted by SI of Kavoor in the Police Station – Charan’s Wife Vidhya

Mangaluru: A 31-year-old man from Moodshedde was seriously assaulted by the Kavoor police here on October 8.

The victim has been identified as Charan (31), a resident of Moodshedde.

Speaking to mangalorean.com Charan said, “On October 8, at around 9.30 a.m, Police-constable Sharat came to my house and said that Sub Inspector Umesh wanted to speak to me. When I asked why, he said, the SI wanted to question me about the previous case which I had appeared in the court regarding the fight with Rizwan. So I went along with the constable, and as soon as I reached the police station, SI Umesh ordered two of his police constables to hold both my hands and he assaulted me with lathis. Due to the severe blows I am unable to sit or sleep on my back”. Charan further said, “While I was getting beaten up by the SI, he kept on saying why did I appear before the court without coming to the police station. In the evening when my wife and mother came to the police station, the police yelled loud at them”.

Speaking to our correspondent Charan’s wife Vidhya said, “At around 9:30 am, police constable Sharat came to our house. My husband was sitting outside, PC Sharat said that the SI wanted to meet him and took my husband along with him. Since my husband didn’t come back home till late evening, me along with my mother-in-law decided to visit Kavoor police station. I was shocked to see my husband badly beaten up. When the police saw me in the police station they shouted at me saying why I was there. When I pleaded with them to release my husband they made me to give in writing stating ‘ Charan will be present in the Kavoor Police station on October 9 by 9:30 am and it is my duty to bring him to the police station. They also made me to write that from October 15, Charan should not be seen in the Moodshedde area”.

When asked if there was any case against Charan in the Kavoor police station, Vidhya said that one month ago, when Charan was coming home, one Rizwan threatened him with life. Charan and Rizwan had some misunderstanding which led in a fight between them and the issue reached the police station, in which Rizwan filed a complaint against Charan in Kavoor police station. Charan directly appeared before the court after 4 days of the incident. Charan has health problems and last year he had undergone treatment for blood clot in his brain, she said. Vidhya said, ” After giving in writing the police allowed Charan to go home. We took him home and after some time he collapsed. Seeing the marks on his body we brought him to the hospital. It is hard to believe that the police are so cruel, where they hurt a human being so bad”.

When Mangalorean.com contacted the Kavoor police station over the phone about the incident, Sub Inspector Umesh said, “Charan is a rowdy sheeter and he is accused in Pitty Nagesh murder case. He was also involved in attempt to murder case under section 307 and last month a case has been registered under section 324. In 2008, we have registered his name in the rowdy sheeter list. On October 8, when I asked him to come to the police station because according to law whoever is involved in such crimes should appear in the police station everyday and sign the ledger. But he refused to do so. I have filed an FIR against him and let him go home”.

When asked about the blood clot on his hips, SI Umesh said, “I am not aware of it”. Charan has been admitted to a private hospital in Mangalore.

Dont you harm the same way in immoral policing?

Hemanth, India Oct 10, 2014
Why police act so rude? Police duty is to protect the people and not to harm them. If there are any issues against anyone, file a FIR against the person and the law will take its own course. Why police take law in their hands. This issue should be taken seriously.

Alwyn, Canada Oct 10, 2014
Finaly agreed by many proud Indians of thier police brutality on its proud citizens be it by narrow minded original or haters of good social workers and peace lovers. India will remain India for 500 years one person trying to develop hard and another litterally pulling it down. Main cause is haters, communals, corrupt officials, rape mongers, and govt and population. India is a best nations but its filled with many mongers who destroy good with bad and make it flat. sad but true. If it can’t change during Modiji time then it won; ‘t change anytime during our lifetime. Only Modi has the ability to change India with its power otherwise never. SO let’s pray that all goes well for Modi for full terms and hope first he can clean these thugs of police brutality on its citizens

Valson Mendonsa, USA Oct 10, 2014
There is a Saying” Jaisa RAJA Vaisa PRAJA”
If there LAW ENFORCEMENT right from corrupt top politician, then all going to be fine..

Rita, Germany Oct 10, 2014
To see such brutal marks on ones Body is really horrible, that too to hear it is from Police. what right they have to beat one Person whatever he is?why the home People are keeping quite?Take a lawyer at any rate. dont leave it like that. They are gone mad. People are go on strike for Little things. why Keep quite here. They made him and his wife write down and put signature. does anyone read it? unjustice from Police reached really the top. Complain to some Minister khader or so. dont leave it. they should be punished. it is horrible what they did. not acceptable. they are against cow slaughter Here what they did is more than that. take a lawyer and seek justice. someone must teach them a lesson.

Original R.Pai, USA Oct 10, 2014
This is why India continues to be a third world nation. Let’s not pretend as if this is an isolated case – Police brutality is something that goes on in almost every police station in the name of ‘investigation’. Our cops are not truly trained to do their job in a professional way. This explains why they are very good in harassing goodangadi owners or ricksaw drivers while they are a big zero in catching high profile cases – Be it ‘social workers’ demolishing a house or smiling Gowda’s son!!

Bhasky, India Oct 9, 2014
This need to be investigated further. The cop has no right to touch, I mean physically touch an accused.

Praveen, India Oct 9, 2014
RampaNNA, champion of the ‘peaceful’ community as he always bleats in his falsetto voice.

By the way, our Rampa says a broom is ENOUGH to clean and make Bharat “swacch”. His aunty Uma Bharati from up North says – no electric crematoriums. Burn up your beside the GANGA.

With a Vedic mindset like this illiterate, what can be achieved? AND, she is supposed to be the Minister responsible for cleaning up the Ganga. Lol.

wilson kinnigoli, India Oct 9, 2014
what a foolishness. what right do they have to beat anyone like this? this is a serious issue n have to be taken seriously by the concerned officials

alwyn, Canada Oct 9, 2014
Can’t believe sure such act by police. What a shame on this police

Anita Shelley, UAE Oct 9, 2014
Regardless of what the SI says, Charan’s — speaks for the brutality.

Michael, Bahrain Oct 9, 2014
When did the cops accepted their mistake ??????
Be a human, you don,t have any right on the citizen. you have to protect them. one day you have to answer god that day will be worst your influence and monetary will not count.

John Rob, Australia Oct 9, 2014
Regardless of what the reason is.. no one should have the right to beat up another person like an animal.
At least the SI could remove his uniform and go one on one fight and see who wins .
This is utter rubbish