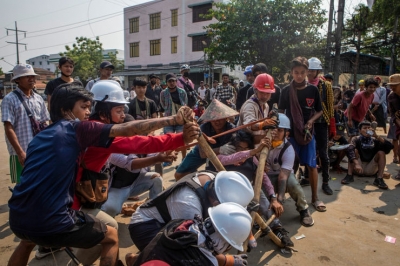 Nay Pyi Taw: Myanmar has released a total of 2,296 detainees from across the country, according to the figures released by the military-run State Administration Council (SAC).

The detainees, comprising 1,839 men and 457 women arrested in connection with the protests staged in the country since the February 1 coup, were released as a priority batch on Wednesday, reports Xinhua news agency.

A total of 721 people from Yangon region, 711 from Mandalay region and 22 from Nay Pyi Taw were among the released.

This latest development comes after U Zaw Htay, who served as the spokesman of the Aung San Suu Kyi-led ousted government of Myanmar, was freed from military custody in capital Nay Pyi Taw after more than four months in detention.

The former military officer, who had also served as spokesman for the U Thein Sein government (2010-15) that preceded the Suu Kyi-led National League for Democracy (NLD) government which was ousted following the coup, was released late last month.

According to the Assistance Association for Political Prisoners (AAPP), at least 858 people have been killed and almost 6,000 others have been arrested in the protests that erupted since the military takeover.