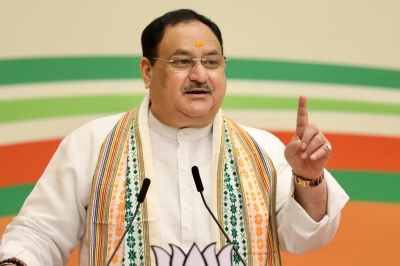 Mehsana (Gujarat): BJP chief J.P. Nadda flagged off the Gaurav Yatra from Becharaji in Mehsana district on Wednesday to reach out to the people ahead of the Assembly elections due this year-end.

While addressing the party workers in Becharaji, Nadda attacked the Congress party. He said, “The party had sown seeds of acacia trees, so acacia trees will grow and development will never take place… Whereas Prime Minister Narendra Modi has laid the path for development first in the state and now for the country. Gujarat’s development model has become a model for many other states.”

He appealed to the workers to take party messages to each and every household and convey about the development works, policies and programmes undertaken by the Central and the state governments.

Later in the day, he will flag off the second Gaurav Yatra from Dwarka in Saurashtra.

The BJP has planned five Gaurav Yatras, two to be flagged off by Nadda and three by Union Home Minister Amit Shah on Thursday.

The Gaurav Yatra that started from Becharaji will conclude at Mata Na Madh in Kutch, and the one that starts on Wednesday afternoon will conclude in Porbandar’s Kutiyana.

The party has assigned 16 national leaders and 14 state leaders to accompany the Gaurav Yatra. It will cover 44 Assembly seats in North Gujarat and Saurashtra-Kutch and will address 145 public meetings.