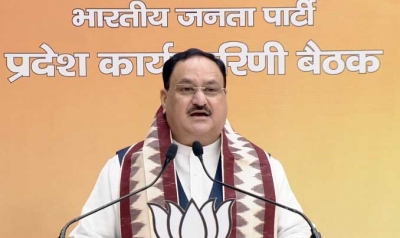 Bhubaneswar: BJP national President J.P. Nadda arrived in Bhubaneswar on a two-day visit to the state.

On his arrival at the Bhubaneswar airport, a grand welcome was given to Nadda, who is in Odisha for the first time after being elected as the national president of the BJP.

As per the schedule, the BJP president will address booth-level workers at Janata Maidan here.

The next day, the BJP chief will visit Jagannath temple, Puri and offer prayers to the holy trinity. Later in the day, he will visit Dhamnagar and meet the family members of late BJP MLA Bishnu Sethi, who recently died. He will also inaugurate the rehabilitation annexe building at Swami Vivekanand National Institute of Rehabilitation Training and Research (SVNIRTAR), Olatpur.

He is also scheduled to hold a meeting of the party’s frontal organisations at the Janata Maidan on September 30.

Keeping the 2024 general elections in mind, the BJP is organising the mega political events. Union Home Minister Amit Shah had visited the state in August.

Subsequently, eight Union ministers have also visited various districts of the state in connection with their departmental events. All the chronological events show that BJP has tightened its seat belt for the 2024 fight, feels a political observer.

For the visit of the BJP president, a total of 25 platoons of police force have been deployed in different locations of the city.

To counter Nadda’s visit, the Naveen Patnaik-led Biju Janata Dal (BJD) is also holding a two-day workshop in the capital city to sensitise its functionaries to prepare a roadmap for its month-long padayatra which begins from October 2.