Home Fit & Fun Namibia have been through an emotional roller-coaster, concedes skipper Erasmus 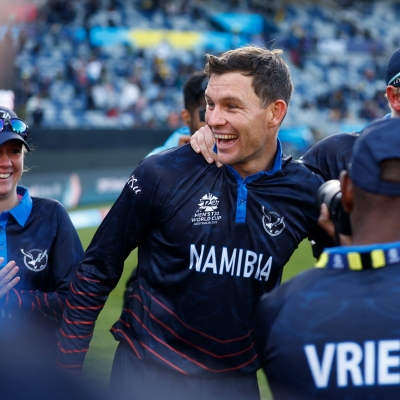 Namibia have been through an emotional roller-coaster, concedes skipper Erasmus

Geelong (Victoria): Namibia skipper Gerhard Erasmus feels his side has been through an emotional roller-coaster in the two matches they have played so far in the First Round of Group A in the ICC T20 World Cup here, with the 55-run thrashing of former world champions Sri Lanka giving them a high followed by the low of losing to the Netherlands by five wickets.

Namibia now face UAE at the same venue on Thursday in a do-or-die clash, where a win will assure them a Super 12 berth, while a loss will most certainly eliminate them.

Erasmus said the loss to the Dutch side after celebrations following the win over Sri Lanka might have left the players emotionally drained.

“Yeah, I think it’s only human nature to sort of celebrate a big win like that (against Sri Lanka), and I think the emotions would have been inevitable. And in cricket, you have those mental challenges. I think it was a very tough thing to do to recover after that (loss to Netherlands),” said Erasmus.

“Although we have all the know-how how to do that, the experience of how to do that, I think it’s still just something of a momentum, sort of ups and downs that you have in tournament cricket. And I think it was always going to be very tough to reset fully and to have the same intent as that first game, and I think our boys really tried to do that in large part.”

The skipper said his side had planned thoroughly for the Netherlands challenge but unfortunately the plans didn’t fructify.

“I think our preparation was really good for the Netherlands game, and I think we had all the right plans, and unfortunately I just didn’t think it was our day yesterday. I think we got outplayed. I think they really bowled well in certain overs and phases of the game, and we showed how tough a wicket it was to score on, and we stuck to sort of what we know, which is a good fight for 40 overs long, and we made it a very close game.”

The skipper said it would be tough to ‘reset’ for the crucial game against the UAE after the shattering loss but the players will still give it their best shot.

“I do think it was very tough to mentally reset after that game. I do think we did our best to do that, and that’s what we’re going to do for the next game.”

He also added there will be a few nerves as well, given that it was a do-or-die situation for the side.

“Yeah, I think it’s always something that we try and use as a bit of analysis how other teams play, so definitely something that we’ll be looking into and just an added advantage against the other side that you’re playing against, having seen more or less all of their battles before. All the batters say that they’ve got a fresh side, so we’ve got some work to do to be properly prepared for that game,” he added.