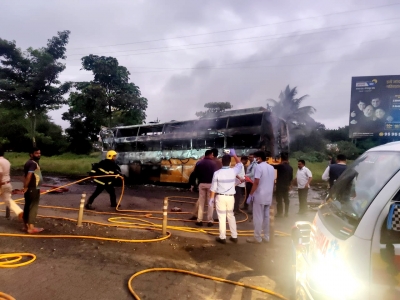 Nashik: The death toll in the Nashik bus accident rose to 12 with two more victims succumbing to their injuries, while another 28 are under treatment at different hospitals, officials said here on Saturday.

At around 5 am on Saturday, a private passenger bus belonging to Chintamani Travels rammed into a truck carrying diesel on the Aurangabad Road on the outskirts of Nashik.

The impact of the crash was so severe that the bus burst into flames, trapping many of the passengers who were sleeping at that early hour.

As per details available, the bus started from Yavatmal and was bound for Mumbai via Pusad and Pune, with over 30 passengers on board.

Ordering a probe into the incident, Shinde rushed to Nashik on Saturday afternoon and visited some of the victims undergoing treatment at the local hospitals.

The Prime Minister has announced a compensation of Rs 2 lakh each to the kin of the 12 deceased persons, and Rs 50,000 each to the injured, while Shinde said that Rs 5 lakh each will be given to the families of the dead while the state will bear the full treatment expenses at public or private hospitals for the injured.

The spokespersons of Congress, Nationalist Congress Party and Shiv Sena, along with Shinde group’s ministers have also condoled the tragic accident and demanded an in-depth probe into the matter.