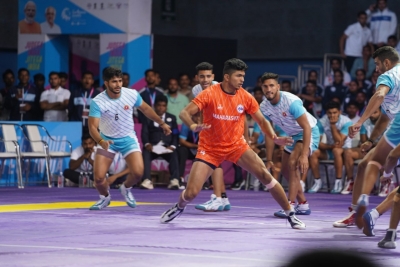 Ahmedabad: Pro Kabaddi League (PKL) Aslam Inamdar and Pankaj Mohite starred as Maharashtra defeated Haryana 39-35 to book a place in the men’s kabaddi final at the 36th National Games on Friday. Maharashtra will take on Uttar Pradesh in the final clash on Saturday.

The kabaddi fans in Ahmedabad got a glimpse of their favourite Pro Kabaddi League stars as they appeared for the semifinalists, and proved that the craze for the sport is certainly going to rise when Season 9 of the League begins on October 7 in Bengaluru.

The Maharashtra defense unit showed great form in the opening minutes of the match and helped their team to take the lead at 4-2.

PKL player Akash Shinde pulled off a fantastic raid to help Maharashtra take a stronghold of the match. The 10th highest raid points scorer in the last season of PKL, Inamdar also stepped up for his team as Maharashtra led at 10-5 in the 11th minute.

The most expensive Category B player Guman Singh tried to lead the fightback for Haryana, but the Maharashtra defense unit kept their opponents at bay. Another PKL player Pankaj Mohite carried out a brilliant raid just before the end of the first half as Maharashtra led at 21-12, the PKL organisers informed in a release on Friday.

Maharashtra inflicted an All Out at the start of the second half and took a massive lead at 25-14. In the 27th minute, Maharashtra pulled off a Super Tackle to extend their lead even further.

Experienced PKL players Surender Nada and Rajesh Narwal tried to reduce the gap between the two teams, but Maharashtra held on to their lead and eventually walked off the mat as winne