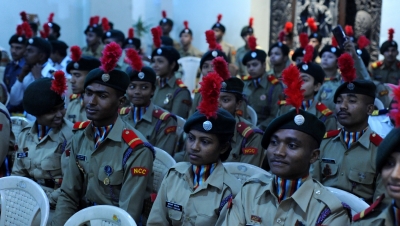 Kolkata: The financial crisis being faced by the West Bengal government has adversely impacted the careers of thousands of cadets of the National Cadet Corps (NCC) from the state. West Bengal, with over a lakh NCC cadets, features among the top states so far as enrollment in this organisation is concerned. State governments are supposed to bear 25 per cent of the total expenses involved in training and other activities of these youngsters.

As many as 50,000 cadets will not be able to appear for their ‘B’ and ‘C’ Certificate examinations in 2023 as adequate number of camps were not organised this year.

“This is a serious issue. Cadets aspire to appear for their ‘B’ and ‘C’ Certificate examinations and get good scores as it helps them in joining the Indian Armed Forces as officers. Those who have high scores in the ‘B’ and ‘C’ Certificate examinations (both) and graduate with more than 55 per cent marks do not need to sit for the written test for the Combined Defence Services (CDS) examination. They directly appear for the Services Selection Board (SSB) interview. This is a great advantage,” said Maj Dr B B Singh, PRO, NCC, West Bengal.

“This is a sad state of affairs. Cadets from this state have so much potential. They bag honours every year during the Republic Day NCC Camp in New Delhi. With a bit of help, they can join the Armed Forces as officers. As cadets, they regularly receive training from the Army, Navy and Air Force and have a distinct advantage over others who appear for the SSB interview. It is strange that a state government can distribute hundreds of crores to Durga Puja organisers but can’t release due funds to the NCC. That too, in a state where educated youth are looking for job opportunities,” a senior Army officer said.

The NCC has taken up this matter with the state government. According to an official in the West Bengal finance department: “There is a paucity of funds. There are even Dearness Allowance (DA) demands by state government employees that we haven’t been able to meet. A lot of funds from the Centre under several schemes have also been held up. We are looking into this matter.”

Maj Singh, who is also a school headmaster, has been motivating youngsters, including girls and those from marginalized sections of society, to join the NCC and work hard towards a career in the Armed Forces.

“The NCC disciplines the youth and channelises their energy in a positive direction. During the Durga Pujas, they proudly don their uniforms and help the police in managing traffic. They are always ready to serve. You will hardly find any NCC cadet involved in any anti-social activity. I am worried that this attitude by the state will end up creating disillusionment among youngsters,” he said.