Home Agency News Next Tamil Nadu CM will be from AIADMK: Ravi 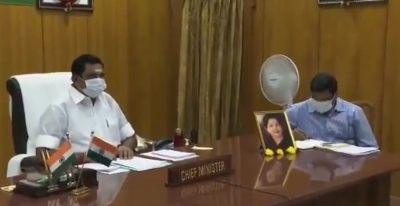 Next Tamil Nadu CM will be from AIADMK: Ravi

Chennai: BJP’s national general secretary in-charge of Tamil Nadu, C. T. Ravi on Wednesday said that the next Chief Ministerial candidate will be from the largest partner the All India Anna Dravida Munnetra Kazhagam (AIADMK).

Addressing reporters prior to the meeting of the BJP’s Assembly conveners, co-conveners and coordinators, here, Ravi said that the NDA coordination committee will announce the Chief Ministerial candidate of the AIADMK-led alliance in Tamil Nadu once the Assembly elections are announced and that candidate will be from the largest partner, the AIADMK.

He added that at present Edappadi K. Palaniswami is our Chief Minister.

“The CM candidate is always decided by our Parliamentary Board and that candidate will be from the largest partner, the AIADMK,” he said.

In response to a question whether incumbent Chief Minister Palaniswami would be the alliance’s CM candidate, Ravi added that when the NDA alliance in Tamil Nadu gets the majority (after the results), both Parliamentary Party board, the NDA coordination committee will decide.

He further added that Prime Minister Narendra Modi is the leader of the alliance and is leading the elections everywhere across the country.

When repeatedly asked about the BJP’s position on the CM candidate, Ravi said the AIADMK will decide their candidate.

“We will ask them (AIADMK) the question (who they want to be CM). They will decide. Only when the election notification comes, the NDA partners will decide who their CM candidate is,” he reiterated.

He said the AIADMK continues to be one of the partners of the NDA and has supported the Union government on all issues.

Meanwhile, BJP Tamil Nadu president L. Murugan alleged that the DMK was threatening him with a legal notice on the issue of Murasoli’s land ownership.