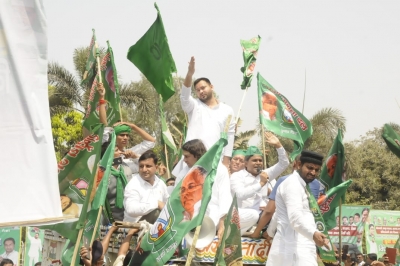 Patna:  After day long massive violence in and outside Bihar Vidhan Sabha, Leader of Opposition Tejashwi Yadav in Bihar Assembly said that Cheif Minister Nitish Kumar is the biggest liar of the country.

“He is misleading the people of Bihar over Police Amendment Bill. Such a bill will give undue power to the police department. After the bill is passed in the Assembly, the police department will be entitled to arrest anyone without the warrant of court,” Tejashwi said.

“Such an act will give free hand to the police and one such example was displayed in Bihar Vidhan Sabha on Tuesday when legislators were threshed mercilessly and threw out of the premises. Several leaders of our party were kicked and punched in front of Patna SSP and district magistrate. Several journalists were also beaten by police and Marshells of Vidhan Sabha. After this act, police will drag common people from their houses and put them in jail without any criminal charges,” Tejashwi added.

Earlier in Vidhan Sabha, Nitish Kumar claims that the Opposition leaders over reacted without understanding every point of this act.

“The Police Amendment Act is meant for Bihar Military Police (BMP) which is deployed at Bodhi temple in Bodh Gaya, Darbhanga airport and other important tourist and strategic places in Bihar. With this act, they have the power to arrest any person over suspicious activities. Suppose, if a person is trying to fire in places like Bodhi temple, BMP Jawans would not wait for local police to come and arrest criminals. The BMP Jawans, after this act, have power to arrest such criminals after neutralising them,” Kumar said.

“Under CrPC Act 42, the police has the power to arrest any person involved in firing in front of them. If such an Act already exists, what is the need of additional Act. Nitish Kumar is misleading people of Bihar. He is talking about half truth. He is not discussing hidden points of this Act,” Tejashwi said.

“When I urged speaker to discuss this matter in the house, I was not allowed to speak. We were thrown out of the house and then CM addressed the house on this bill in the absence of Opposition parties leader,” Tejashwi added.

Reacting on Dak Banglow Chowk stone pelting incident, he said that Nitish Kumar made a plan to kill me. When I reached at Dak Banglow Chowk, stones were thrown from multi-storey buildings located in the surroundings of that Chowk. I challenge Nitish Kumar to put all the video evidences in the public domain to identify actual stone pelters,” Tejashwi said.