Home Agency News Nitish slams Amit Shah, says ‘he has no knowledge of our country’s... 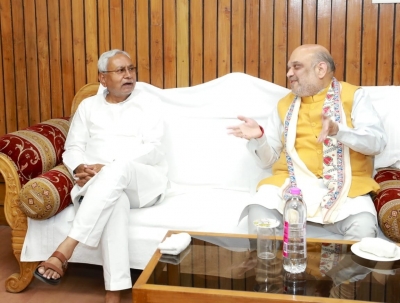 Nitish slams Amit Shah, says ‘he has no knowledge of our country’s history’

Patna: Bihar Chief Minister Nitish Kumar has slammed Union Home Minister Amit Shah and said that the latter has been in politics only for the last few years, therefore he does not have any knowledge about Jayaprakash Narayan (JP) movement or socialist leaders like Ram Manohar Lohia.

He added that people like Shah do not know about the history of the country.

“People like him (Amit Shah) do not have any contribution in the country. He does not know the history of the country. They do not have knowledge about Jayaprakash Narayan ji. They get the opportunity to stay in the government. Hence, they are giving statements against me,” Kumar said while offering tributes to socialist leader Ram Manohar Lohia at his statue in Patna on his death anniversary.

“I went to Nagaland on the invitation of the people of that state. It was a grand event. People of Nagaland have great respect for Jayaprakash Narayan ji. He stayed there for three years from 1964 to 1967 and addressed the issues at that time,” he added.

The Chief Minister on Tuesday said that Prime Minister Narendra Modi and the Union Home Minister have no knowledge about the freedom struggle and the JP movement.

Modi gained prominence as a politician only after 2002, Kumar added.

Shah came to Sitab Diara, the birthplace of Jayaprakash Narayan in Bihar’s Saran district, on Tuesday.

The Union Home Minister said that the Bihar Chief Minister is sitting in the lap of the Congress which had sent Jayaprakash Narayan to jail only to retain power in Bihar.