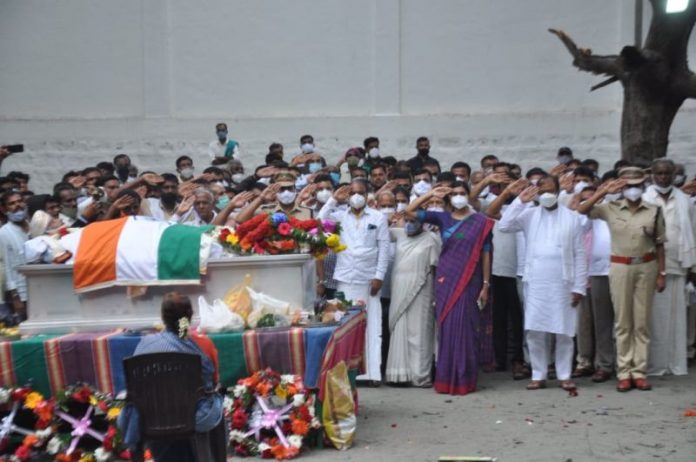 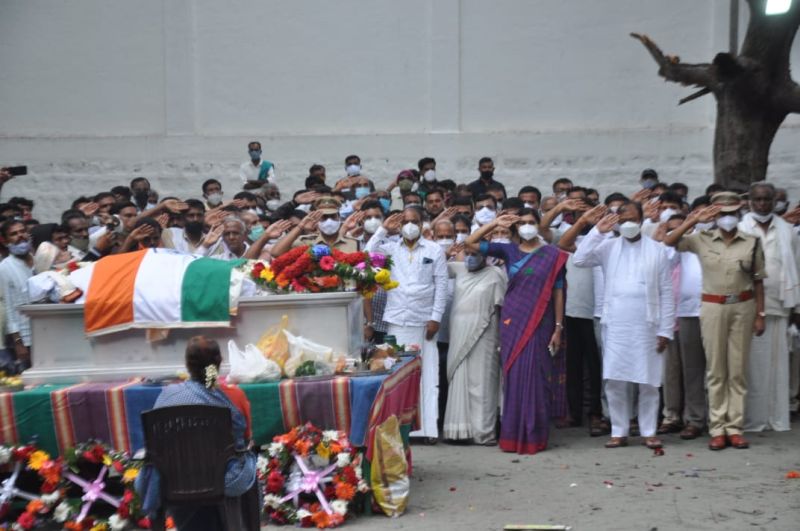 Gowda, 93, who died on Saturday, was a native of Kalamudana Doddi (K.M. Doddi), who graduated from Maharaja’s College and did a law course at the Government Law College, Bengaluru. He won from Kirugalavu Assembly constituency and entered the Vidhana Soudha along with former prime minister H.D. Deve Gowda in 1962.

He is survived by his wife, two sons and two daughters.

The state government handed over the tricolour to his widow Padma, while his eldest son Prakash lit the pyre in accordance with Vokkliaga community rituals, to which Gowda belonged.

Inspired by Mahatma Gandhi, Gowda took part in the freedom struggle and was imprisoned for various periods between 1942 and 1947. His participation in the freedom movement laid the foundation for his political life.

He represented the seat till 1989, winning six times and contested the Parliament election from Mandya and won in 1989 and 1991. He was also Minister for Forests in Chief Minister Gundu Rao’s Cabinet from 1981 to 1983.

Gowda founded the Bharathi Education Society and brought in a revolution in education by starting schools and colleges in the district. He also started a naturopathy college and also a super speciality hospital in KM Doddi.

He plunged into the Cauvery agitation and strongly opposed the interim order of the Cauvery tribunal and was the man behind the months-long stir that drew the attention of both the Central and state governments.

One of the biggest achievements of his times was to bring all farmers’ organisations on board and he was the driving force behind the stir by launching an umbrella organisation – Cauvery Raitha Hitarakshana Samiti (Cauvery Farmers Rights Protection Committee). Though he was a Congressman, he did not hesitate to protest against the then Chief Minister S.M. Krishna who too is from Mandya district and his contemporary. He was always critical of governments for betraying farmers by releasing water to neighbouring Tamil Nadu.

Gowda was president of the Cauvery Raitha Hitarakshana Samiti and staged fast unto death, demanding justice to farmers of Mandya district. Many Chief Ministers and ministers used to make a beeline to his house and seek his suggestions before formulating the state’s strategies on the Cauvery issue.

Several ministers, MLAs and MPs have condoled Gowda’s demise. Chief Minister B.S. Yediyurappa, in his condolence message, said Gowda imbibed the teachings of Gandhi and was at the forefront of the Cauvery water agitations.