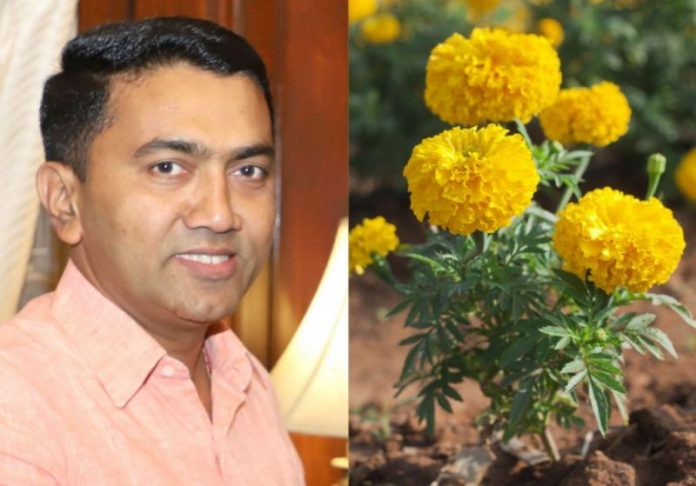 Panaji: After announcing a stop to vegetables from other states in government schemes, Goa Chief Minister Pramod Sawant on Monday urged people to grow marigold flowers, which are presently imported from Karnataka.

Noting that Diwali is around the corner, he said that there will be a need for marigold flowers.

“Marigolds come from Karnataka. We can grow them in Goa. Cant, we make products as per need? We can do it. We daily need it,” he said, adding that as there are many temples in the coastal state and flower vendors are dependent on supplies from Karnataka, they should grow it in their villages.

Large quantity of marigold flowers come from Karnataka on the occasion of Dussehra and Diwali. Even on a daily basis, there is demand for marigold as it is required for religious programmmes in the state.

“Flower vendors selling flowers outside temples bring it from Panaji, if they grow it in their villages, then they will also save on transport. We need to think about this,” Sawant said.

He said that to achieve a goal of self-reliance, there is a need to focus on the production of vegetables and fish too.

“To become self-reliant, we need to give importance to local produce. I am optimistic that people will do it,” he said.

At the launch of the ‘Natural Farming’ programme on September 20, he had noted that Goa is dependent on vegetables procured from Karnataka’s Belgavi. “We now ‘like’ the taste of outside procurement, more than our traditionally grown here. This is a fact,” Sawant had said.

Around 1,300 vendors in the state sell vegetables supplied by the Goa State Horticultural Corporation Ltd (GSHCL), which purchases these from other states.

“If we increase local vegetable production, then the Horticulture Corporation will give a good rate (to farmers). In a few days, it will stop importing vegetables from other states and will purchase only locally-produced vegetables,” he had said.