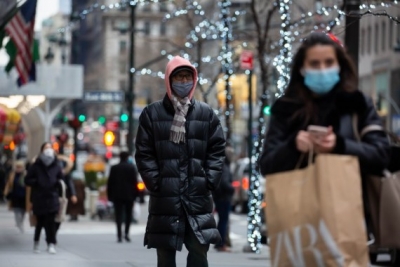 New York: The New York State Department of Health (DoH) has confirmed three additional cases of the variant of Covid-19 (B.1.1.7) found in the United Kingdom, Governor Andrew Cuomo tweeted.

“Two cases are related to the first case in Saratoga County. An additional case in Nassau County was confirmed that appears to be unrelated,” he added.

The three cases were sequenced through DoH’s Wadsworth Center which had analyzed more than 2,200 viral sequences as part of the state’s new strain testing program, said an official release on Saturday, Xinhua news agency reported.

“The UK strain is here, it is real, and the Usain Bolt-like speed through which it spreads is nothing short of frightening,” the governor was quoted as saying.

“There’s no mystery as to how it got here — it got on a plane and flew here from Europe, just like the original strain did. Yet, the federal government continues to refuse to learn from the spring and mandate testing for all international travellers. Their failure to act means the rest of us need to be that much more vigilant in our work to stop the spread, as well as do all we can to accelerate the distribution of the vaccine,” he said.

“In the meantime, Wadsworth Lab will continue to aggressively sequence samples from around the state, so that any more instances of the UK strain can be identified, and immediately contained and contact traced,” he added.

The Wadsworth Center, DoH’s research-intensive public health laboratory located in Albany, confirmed New York State’s first case of the variant (B.1.1.7) of the virus that causes Covid-19 on January 4.

“It’s a gentleman who is in his 60s. He was symptomatic, but he is on the mend and he’s doing better. He did not travel recently, so this suggests that it’s in the community, it was community spread as opposed to having travelled to the UK,” the governor was then quoted as saying in an official release.

The New York State government announced on December 22 that the Wadsworth Lab had begun aggressive research of the new, highly contagious Covid-19 strain discovered in the United Kingdom.

Wadsworth and DoH had forged agreements with six hospitals from across the state to obtain additional samples and is continuing to make arrangements with other hospitals to do the same, it said.

A total of 52 cases of the coronavirus variant first identified in Britain had been identified in the United States, according to the data updated on Thursday by the US Centers for Disease Control and Prevention (CDC).

As of Saturday afternoon, the Center for Systems Science and Engineering at Johns Hopkins University reported 39,334 coronavirus deaths in New York State, the worst in the country.