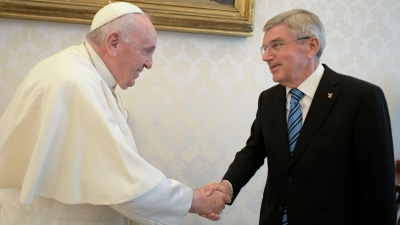 The Vatican: The International Olympic Committee (IOC) has joined several major sports and intergovernmental organisations in signing a new declaration to foster inclusion and access to sport for all during the two-day International Summit on Sport, that ended at the Vatican on Friday.

Recent times have seen the emergence of new challenges for societies, many of them accelerated by the Covid-19 pandemic. The Declaration recognises the important role that sport plays in turning these challenges into opportunities and most notably in contributing to a more inclusive society, in which every person is accepted and welcomed, regardless of ability or disability. The Declaration is a new commitment to promote the social and inclusive benefits of sport.

On the sidelines of the Summit, IOC President Thomas Bach and Pope Francis held a meeting that came together on September 29 and 30, discussing the contribution of sport to solidarity and peace around the world. They also agreed to cooperate to support the refugees.

“Our conference and the Declaration that we will sign today are the latest demonstrations of our shared belief in the power of sport to make the world a better place,” said President Bach in his speech at the Summit.

“I would like to thank Our Holy Father for this wonderful initiative that illustrates how well faith and sport can complement each other. Both faith and sport share many of the same values that guide us to live together in peace with our fellow human beings.”

Alongside the Summit, the IOC President was invited to a private audience by

Pope Francis, who invited the IOC president for a private audience, expressed his appreciation for the initiatives being taken by the IOC, particularly the support for refugees through the Refugee Olympic Team and the Olympic Refuge Foundation (ORF).

President Bach expressed thanks for his strong support and informed His Holiness that the IOC was inspired by His Holiness’ great affection and support for refugees, the IOC said in a release on Friday.

Addressing the Summit, President Bach underlined the Olympic Movement’s mission to promote sport as a force for good in the world and highlighted its ongoing commitment to foster solidarity, peace and non-discrimination.

“In these difficult times — with divisions and wars on the rise — we need this unifying power of sport to promote our Olympic mission of peace and solidarity more than ever,” he said.

“But peace is about much more than setting aside differences. It is also about creating a better world where everyone is able to flourish; where people are treated equally; where all forms of discrimination and exclusion have no place.”

President Bach also highlighted some of the areas in which the IOC is already working to foster and promote solidarity through sport, including the creation of the IOC Refugee Olympic Team and the establishment of the ORF.

“Sport is empowerment. Sport is inclusion. Sport is respect. Sport is health. Sport is building confidence and dialogue. Sport is solidarity. Sport is peace,” he said.

Closing his speech, President Bach urged all attendees to work together to ensure the unifying power of sport is fully realised.

The International Summit on Sport welcomed more than 200 people from the world of sport, including International Federations and amateur sports associations.

Amongst the speakers were Filippo Grandi, UN High Commissioner for Refugees, and IOC Member Andrew Parsons, President of the International Paralympic Committee (IPC).

At the congress, representatives of different Christian denominations and other religions were in attendance, together with representatives from non-profit organisations and educational institutions working for inclusion in society through sport.