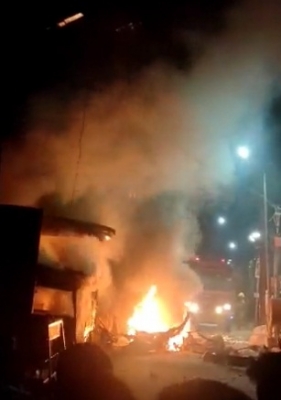 Identified as Afzal Khan, the sixth arrested is a relative of Jameesha Mubin, who died in the car blast.

The investigators have also found that the accused, including Mubin, was planning serial blasts in Coimbatore and adjacent towns.

While Jameesha Mubin got killed on Sunday morning, five of his accomplices, including Mohamed Thalha, son of Al-Umma founder S.A. Basha’s brother was planning a series of explosions.

The police have also sent notices to major online stores as the accused have given statements that the chemicals, including potassium nitrate, sulphur, and other materials, were bought through online sites. Police said that while there was a huge cache of these raw materials that can be used to make country-bombs, the purchase was made in small quantities.

The police have found evidence of the arrested accomplices of Jameesha Mubin having contacts with the IS operatives.

The Tamil Nadu government has already recommended an NIA investigation into the case. A team of NIA sleuths led by DIG K.B. Vandana was in Coimbatore and conducted a preliminary probe into the case.

Coimbatore has been a sensitive town of South India and a major serial blast on February 14, 1998 had rocked the city. Blasts took place in 12 places in 11 areas of the city, primarily aimed at then Deputy Prime Minister of the country, L.K. Advani. The blasts conceptualised and executed by the dreaded Islamist organisation, Al- Umma left 58 persons dead and 200 injured severely.

What makes matters worse is that one of the accused in the October 23 car blast case, Mohammed Thalha, is the son of Nawab Khan, brother of S.A. Basha, founder of Al-Umma.