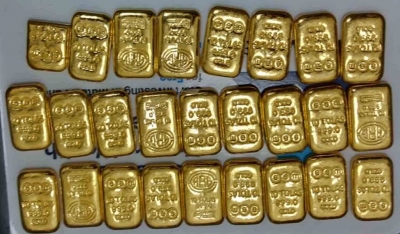 Thiruvananthapuram:  On the eve of the first anniversary of the now infamous Kerala gold smuggling case, which at one point even threatened to unseat the Pinarayi Vijayan government, following a massive onslaught by both the Congress led UDF and the BJP, not only did Vijayan return with a thumping win in the April 6 assembly polls, he continues to be in the driving seat, as the various national agencies conduct their never ending probe.

It all began when on July 5 last year, with the arrest of P.R. Sarith, a former UAE Consulate staffer, and then came the arrest of another former staffer, Swapna Suresh, who afterwards worked in the Kerala IT Department’s Space Park.

It was joy for the principal opposition parties who had a roaring time taking out juicy tales being put out by the dozen TV channels, but Vijayan time and again showed grit and used to throw up his two hands and sternly say, “these hands are clean and that’s why I am able to lift my hands”.

Even though over a dozen arrests have been made by the various agencies, there seems to be some road blocks in the case and then came the local bodies poll towards the end of the last year and this was raked up, but thanks to Covid, Vijayan was able to come unscathed in the polls and that was a sort of morale booster for him and the Left.

With the success at the local bodies poll, Vijayan’s next stop was the April 6 assembly polls and despite the massive opposition onslaught raking up the gold smuggling case, but when votes were counted on May 2, Vijayan wrote himself into record books by retaining power, a feat, that has not happened in the past five decades.

But new Congress president, an old time foe of Vijayan — K. Sudhakaran, however has decided not to lie low and on the alleged gold smuggling cases in which new links with the CPI-M cadres are being reported in the past one week, he said, “All those who are doing this are known people to the top brass of the CPI-M leadership in Kannur. Their role model is none other than Vijayan, who we all saw what happened during the now infamous Kerala gold smuggling case. Were not Vijayan’s close aides in his own office not involved in it? Initially he feigned ignorance about prime accused Swapna Suresh, now all know what his relationship with her was.”

He showed a bundle of papers and said this was a 250-page report filed by the Customs in the Kerala gold smuggling case.

“Vijayan is silent on the references made in this report which says that there was serious breach of protocols when meetings of the UAE Consul General and Vijayan took place through Swapna Suresh and Sivasankar at the residences of both. These meetings had bypassed the state protocols and also the Ministry of External Affairs. What was Vijayan discussing and even after more than a week passing, he is yet to come clean on the Customs report,” said Sudhakaran.

Incidentally now all eyes are on the Customs as they will be making the first move, after they get a reply from the UAE Embassy as the final charge sheet would be submitted and the trial is also expected shortly thereafter.