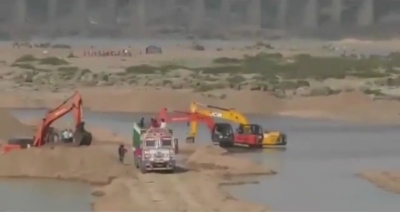 The Bihar government has decided to allot sand mining tenders only to persons having clean image.

Patna: The Bihar government has decided to allot sand mining tenders only to persons having clean image.

As per an official notification of the mining ministry, a person involved in criminal cases like murder, rape, dacoity or robbery are ineligible for getting contract of sand mining in a particular zone in various rivers.

Sand mining is one of the revenue generation sources for the state government.
However, on three or four occasions firing took place between two criminal groups in Patna’s Bihta and Maner regions over the dominance in Sone and Ganga river.

“The actual idea is to decriminalise sand mining operations in the state. Hence, it has been decided to disqualify a person who is facing criminal cases like murder, rape, extortion, kidnapping, robbery and others. If anyone has court cases over property disputes or any other cases, they have to inform the same in affidavits and it is mandatory from them to take character certificates from the offices of district magistrate, SP, and SDO,” the notice said.

“In case, anyone gives wrong information and it is detected in a scrutiny, their deposits will be seized. Besides, the department will lodge FIR and black list them for the next two years,” the notice further said.

However, an official of the mining department said that the gang involved in the sand mining will apply in the names of women of their houses to obtain contracts. New notification may not affect the criminals involved in this business, the official added.