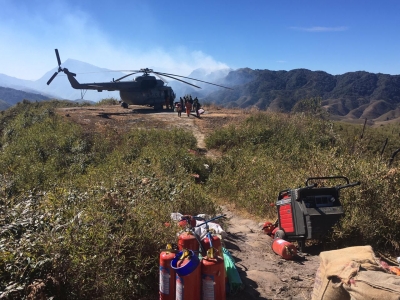 Kohima/Imphal: The fire fighters, including the IAF and the NDRF, would continue their operation for another two days to fully douse the 11-day long wildfire in the famous Dzukou Valley on Nagaland-Manipur, officials said on Friday night.

“The dousing operation, both in the ground and in the air, would continue for another 48 hours. Small fires might be there inside the deep jungle or at the bottom of the hillocks. We would closely oversee the situation before taking the subsequent steps,” Ruangmei, who is supervising the operation, told IANS over phone from Kohima.

He said that responding to the Nagaland government’s requisition, the IAF had started uninterrupted operations since January 1.

An Assistant Sub-Inspector of the NDRF deployed to tackle the fire was found dead in his tent on Tuesday in northern Manipur’s Senapati district bordering Nagaland.

The wildfire broke out in the Dzukou Valley under Kohima district in southern Nagaland on December 29 and crossed over to the northern Manipur side forcing both the state governments to request the NDRF and the army to help contain the wildfire.

Both Manipur Chief Minister N. Biren Singh and his Nagaland counterpart Neiphiu Rio had conducted aerial surveys of Dzukou Valley to personally oversee the fire and its effects.

Nagaland Governor R.N. Ravi visited the fire affected areas and urged the state government to immediately frame appropriate SOPs, including Satellite Based Real Time Early Warning Systemm to prevent the recurrence of such a disaster.

Forest officials of Nagaland and Manipur said that they are yet to assess how much vegetation, flora and fauna have been destroyed due to the wildfire since December 29.

According to the officials, the inferno has destroyed much of the forest, seasonal flowers, flora and fauna and harmed the rich biodiversity of the valley, which is also a famous trekking site.

One of the 10 most beautiful places in the mountainous northeast India, the Dzukou valley, 30 km from Kohima, is also a sanctuary for the endangered Blyth’s tragopan – Nagaland’s state bird – and other species of birds and animals.

The iconic valley, situated at an altitude of 2,452 metres above the sea level, is a popular tourist spot and also famous for its seasonal flowers and biodiversity.

Often caught in a boundary dispute between Manipur and Nagaland, it has been prone to wildfires.

Members of the Southern Angami Youth Organisation (SAYO), which runs an adventure-based conservation programme, tackled such fires in many instances earlier. In 2006, the wildfire affected a 20-km stretch in the southern part of the valley.