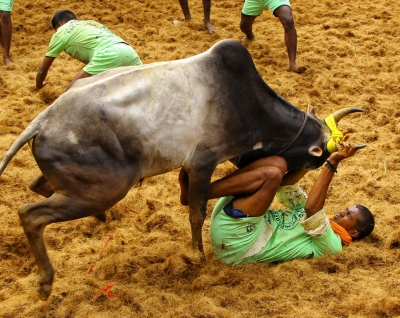 Chennai: Over 50 doctors and people for the Ethical Treatment of Animals (PETA) India appealed to the Tamil Nadu government to immediately withdraw the permission for the annual bull taming event — ‘Jallikattu’.

Jallikattu is typically celebrated in the southern state of Tamil Nadu as part of the Pongal celebrations, on the Mattu Pongal day, which occurs annually during this month.

Over 50 doctors have signed a letter to the Tamil Nadu Chief Minister, Edappadi Palaniswami and Health Minister C. Vijayabaskar urging them to immediately withdraw the permission, which the doctors warn poses a grave risk to the general public because of the ongoing Covid-19 pandemic.

The appeal is in response to the Tamil Nadu government’s recent order allowing the conduct of Jallikattu events with hundreds of people present, People for the Ethical Treatment of Animals (PETA) India has also asked the state government to stop Jallikattu events.

The letter signed by 50 doctors, states, “To prevent the rapid spread of Covid-19 and to protect public health, as well as to ease the pressure on the healthcare professionals, non-essential activities such as Jallikattu events, which lead to unnecessary gatherings of people, must not be allowed.”

The letter also states, “Since the Tamil Nadu government legalised Jallikattu in 2017, at least 22 bulls and 57 humans have reportedly died, while 3,632 humans were injured in events organised throughout the state.”

They also warn that even more human deaths will likely occur because of Covid-19 if Jallikattu events are allowed to be organised in the state.

PETA India Research Associate Dr. Ankita Pandey further cautions that more people are expected to die this year, not only because of Jallikattu itself but also because of Covid-19. “If Jallikattu events are not stopped, if huge crowds gather to torment bulls, society will be tormented, too,” she urges the TN government

The healthcare professionals also forewarn that the measures of Covid-19 — negative certificates for participants and thermal screening of spectators as pre-conditions for allowing Jallikattu are not enough to stop the spread of the virus.

And their letter further says, during the incubation period, a contagious person may be tested too early and produce a false-negative result and not everyone with Covid-19 develops or sustains a fever.

This event is associated with strength and courage and honours the bull owners. However, it is undoubtedly cruel to animals. In 2014, Jallikattu was banned by the Supreme Court.

But the ban on Jallikattu, considered an important authentic tradition and inalienable part of rural society’s culture, had spurred widespread protests in Tamil Nadu. After several years of continuous protests, in 2017 the Tamil Nadu government passed the Jallikattu Bill bringing into effect the Prevention of Cruelty to Animals (Tamil Nadu Amendment) Act, 2017, thereby allowing the conduct of Jallikattu.

As early as 2010 itself, an investigation led by the Animal Welfare Board of India concluded that “Jallikattu is inherently cruel to animals”. Animal welfare organisations such as the Federation of Indian Animal Protection Organisations (FIAPO) and PETA India have protested against the practice since then.

However, pro-Jallikattu activists countering the animal activists argue that Jallikattu had been known to be practiced during the Tamil classical period (400-100 BC) and inalienable part of the rural Tamil society’s culture.

It was common among the Ayar people who lived in the ‘Mullai’ geographical division of the ancient Tamil country. Later, it became a platform for display of bravery, and prize money was introduced for participation encouragement.

A seal from the Indus Valley Civilization depicting the practice is preserved in the National Museum, New Delhi. A cave painting in white kaolin discovered near Madurai depicting a lone man trying to control a bull is estimated to be about 1,500 years old.

Several references are found in ancient Tamil Sangams literature which described the practice as “Yeru thazhuvuthal” (Bull embracing). The modern term Jallikattu or Sallikattu is derived from “Salli” (Coins) and “Kattu” (Package), which refers to a prize of coins that are tied to the bull’s horns and that participants attempt to retrieve.