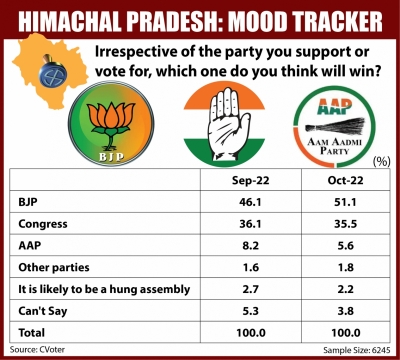 New Delhi: With Himachal Pradesh to vote in Assembly elections on November 12, the ruling BJP has an edge over its competitors, the Congress and the Aam Aadmi Party, as per a survey.

According to the CVoter survey, conducted for ABP News, respondents, asked irrespective of whichever party you support or vote for, which party or alliance do you think will win the Himachal polls, a total of 51.1 per cent said that the BJP will win the election.

The survey was done in both September and October. The sample size is 6,245 and the error margin is 3 to 5 per cent.

However, when the same question was asked in September, only 46.1 per cent of people had said that the BJP will retain power.

Meanwhile, the inclination towards other parties like Congress and AAP has decreased from September to October.

In September, 36.1 per cent of surveyed people said that Congress may form the government on the same question, which reduced to 35.5 per cent in October as per the survey.

For AAP, only 8.2 per cent of the respondents said that it will win, while the number came down to 5.6 per cent.

However, 1.6 per cent people also said other parties in September and the next month it was increased to 1.8 per cent for other parties.

While, 2.7 per cent chose ‘likely to be hung Assembly’ in September, in October, this response came down to 2.2 per cent.

As per the tracker, 5.3 per cent people also chose ‘Can’t say’ in September but only 3.8 per cent chose this response in October.