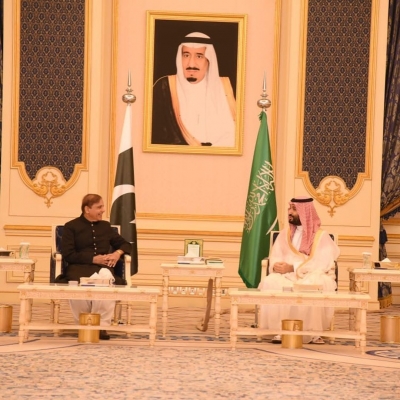 Islamabad: The Shehbaz Sharif government has succeeded in persuading Saudi Arabia to revive a major project shelved during the PTI government and establish a state of the art deep conversion refinery along with a petrochemical complex in Pakistan.

A high-powered delegation of the kingdom, headed by Crown Prince Mohammad Bin Salman, is coming to Pakistan in the last week of November during which a formal announcement is expected in this regard, The News reported.

The Pakistani side, according to the report, made huge efforts to persuade the kingdom to honour the MoUs and invest in the South Asian nation.

Islamabad also put its weight behind Riyadh, which has locked horns with Washington over the cut in oil supply in the international market, The News reported.

In February 2019, during the visit of Mohammad Bin Salman to Pakistan, Saudi Arabia signed MoUs for an investment of $21 billion in various sectors of the economy, including for the project of a deep conversion refinery and petrochemical complex with an investment of $12 billion.

The Saudi oil giant Aramco also conducted a study in this regard which found that setting up a refinery in Gwadar was not feasible.

However, it can be established at Hub, Balochistan, or near Karachi, the official said, The News reported.

Later, when the ties of Imran Khan’s government got strained with Saudi Arabia, the top decision-makers of the kingdom virtually put MoUs of $21 billion on the backburner signed in February 2019, the official said.

Now in the latest scenario, the official said, the Ministry of Petroleum is working on an upgrade of the draft for the refining policy to allure investment for setting up new refineries.

The government is making up its mind to offer the investors profitability at 14-15 per cent against the offer of 9 per cent, earlier offered in the draft for refining policy prepared by the PTI government, apart from increasing the tax holiday’s scope.

The government also wants investment from China for a refinery and to this effect, Prime Minister Shehbaz Sharif, during his upcoming visit to China, will offer Beijing to set up a refinery in Pakistan.