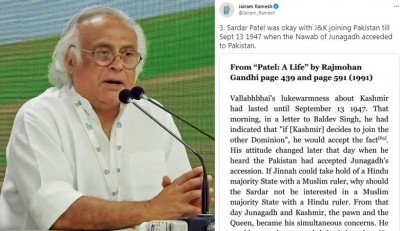 New Delhi:  The Congress on Tuesday countered the claims of Prime Minister Narendra Modi that the issue of J&K was not resolved by India’s first PM Jawaharlal Nehru.

Even though PM Modi did not take the name of Nehru, the Congress said he should check the facts first. The party blamed Maharaja Hari Singh, the then ruler of the J&K for not acceding to India soon after Independence, but took the decision only after invaders from Pakistan tried to take over the place.

Jairam Ramesh, the Congress General Secretary in-charge of the Communication department cited Rajmohan Gandhi’s book and said, “The PM has once again whitewashed REAL history. He overlooks the following facts only to castigate Nehru on J&K. All this has been documented well in Rajmohan Gandhi’s biography of Sardar Patel. These facts are also known to the PM’s new man in J&K.”

Jairam was referring to Ghulam Nabi Azad, who resigned from the Congress and formed a new political party.

Jairam Further said, “Maharaja Hari Singh dithered on accession. There were dreams of independence. But when Pakistan invaded, Hari Singh acceded to India Sardar Patel was okay with J&K joining Pakistan till Sept 13 1947 when the Nawab of Junagadh acceded to Pakistan.”

But Jairam pointed out that, “Sheikh Abdullah championed accession to India entirely because of his friendship with and admiration for Nehru, and his respect for Gandhi.”

“Vallabhbhai’s lukewarmness about Kashmir had lasted until September 13 1947. That morning, in a letter to Baldev Singh, he had indicated that “if (Kashmir) decides to join the other Dominion,” he would accept the fact. His attitude changed later that day when he heard that Pakistan had accepted Junagadh’s accession”.

In the book Rajmohan writes that,”If Jinnah could take hold of a Hindu majority State with a Muslim ruler, why should the Sardar not be interested in a Muslim majority State with a Hindu ruler. From that day Junagadh and Kashmir, the pawn and the Queen, became his simultaneous concerns. He would wrest the one and defend the other. He would also defend Hyderabad, to him the King on the chessboard. Had Jinnah allowed the King and the pawn to go to India, Patel, as we have seen, might have let the Queen go to Pakistan, but Jinnah rejected the deal.”

PM in a veiled attack on Nehru on Monday said Sardar Patel resolved issues of merger of other princely states, but “one person” could not resolve the Kashmir issue.

While addressing a rally in Gujarat, Modi targeted the first PM without naming him, and said, “Sardar saheb managed the merger of all the princely states with India but another person handled this one issue of Kashmir,” he said, and added that is why it still is unresolved and he is following Patel footsteps.