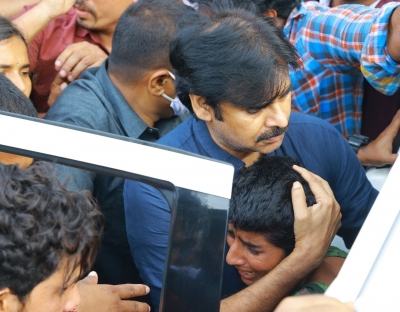 Hyderabad: Actor-politician Pawan Kalyan on Wednesday called up the family of a six-year-old girl who was raped and murdered here last week.

The Jana Sena chief could not reach the house of the victim in Singareni Colony of Saidabad area due to utter chaos as hundreds of his fans gathered there to catch a glimpse of him.

At one stage, the actor stood on his car to wave at the crowd. The stampede-like situation reportedly led to damage of a car of a local resident.

Unable to reach the victim’s house, Pawan called up her parents and consoled them.

Later, talking to reporters he said he would stand by the family till it gets justice.

The actor said the horrific incident has pained him and demanded immediate steps to catch the culprit and punish him.

Pawan said the victim’s parents told him that though they identified their neighbour Pallakonda Raju as the suspect, prompt action was not taken and as a result, he is still at large.

The Jana Sena leader urged the government to extend all help to the family and do justice to them.

Finding fault with media for highlighting only a few incidents, he said this incident came to light through social media. He wanted all to rise above political affiliations to condemn such heinous incidents and police and government should take strong measures to prevent their recurrence.

The child was sexually assaulted and murdered on September 9 by her neighbour, and her body was eventually found in his house.

The horrific incident had triggered angry protest from residents, who demanded immediate and the harshest punishment to the guilty.

Despite the initial claims by police that accused was arrested from his native village in Yadadri Bhuvanagiri district, he remains still at large.

Hyderabad police on Tuesday announced a reward of Rs 10 lakh for any information leading to arrest of the accused.

The police also released a photograph of him.