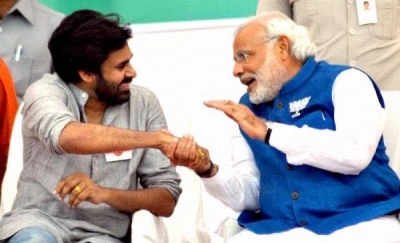 The Jana Sena leader will arrive in the port city later in the day and call on the Prime Minister at around 8.30 p.m.

According to Jana Sena sources, the meeting will take place at the hotel where Modi would be staying.

Jana Sena’s political affairs committee chairman N. Manohar is also likely to accompany Pawan Kalyan during the meeting. Sources said the meeting was fixed as per the information received from the Prime Minister’s Office (PMO).

This will be a significant political development in Andhra Pradesh as Pawan Kalyan, an ally of the BJP, is keen to forge a grand alliance of opposition to take on ruling YSR Congress Party (YSRCP) in 2024 elections.

A bitter critic of Chief Minister Y.S. Jagan Mohan Reddy, the actor had stated a few months ago that he is waiting for a roadmap from BJP to dislodge YSRCP from power.

The meeting will be significant in the wake of Pawan Kalyan’s desire to have Telugu Desam Party (TDP) as an ally to prevent division of anti-YSRCP votes in the next elections.

Pawan Kalyan had backed the TDP-BJP alliance in 2014 elections to state Assembly and Lok Sabha.

Jana Sena had not contested the polls but the actor-politician had campaigned for the alliance and addressed a few public meetings along with Modi and TDP leader N. Chandrababu Naidu.

Jana Sena had later parted ways with both BJP and TDP for not granting special category status to Andhra Pradesh as committed at the time of bifurcation of the state in 2014.

In 2019, Jana Sena had contested the elections in alliance with the Left parties and Bahujan Samaj Party (BSP), but it won just one seat in the 175-member Assembly with Pawan Kalyan himself losing in both the seats he contested.

In 2020, Jana Sena and the BJP agreed to revive their alliance. However, they have not yet undertaken any joint programme on people’s issues.

The state BJP leaders are also not in support of Pawan Kalyan’s suggestion to revive the alliance with the TDP.

The Prime Minister will be laying the foundation stone for various projects in Visakhapatnam on Saturday. He will also address a public meeting, which is likely to be attended by Chief Minister Jagan Mohan Reddy.

There have been speculations for the last few days on whether Pawan Kalyan would be invited to the public meeting.

The state BJP leaders were tightlipped over this.