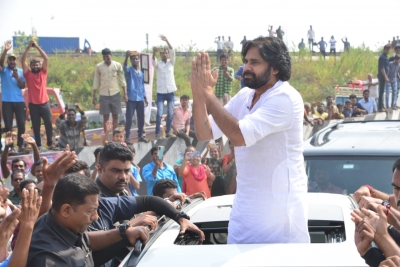 He will visit Jagananna housing colony at Gunkalam on the outskirts of Vizianagaram and interact with beneficiaries of the colony, which is named after Chief Minister Y.S. Jagan Mohan Reddy (Jagananna).

The actor’s fans and JSP workers accorded a warm welcome to Pawan at various places on Visakhapatnam-Vizianagaram road. They showered petals on the actor who stood in his car and waved at the crowd.

At Anandapuram crossroads, the JSP leader was presented a huge garland with the help of a crane.

This is after a gap of three and a half years that Pawan Kalyan is visiting Vizianagaram. He had last visited the district in 2019 during the election campaign.

JSP leaders have alleged large-scale land scam in Jagananna project, the foundation stone of which was laid by the chief minister on December 30, 2020. They say that the government purchased lands from ruling YSR Congress Party (YSRCP) leaders at exorbitant prices in the guise of construction of Jagananna mega project.

A total of 12,477 houses are planned to be constructed in over 397 acres. It will also have civic infrastructure like schools, hospitals, community halls and markets.

However, the mega township’s construction could not be completed. Due to delay in providing basic infrastructure, beneficiaries could not construct the houses. Increase in construction material cost and labour charges, lack of water supply, poor drainage and road network and other reasons also led to the delay in construction of houses.

According to JSP leaders, the sanctioned amount is not sufficient to meet the expenditure of the beneficiaries who came forward to construct houses on their own. The government claims to have provided additional financial assistance in the form of loans.

Ahead of Pawan Kalyan’s visit, YSRCP MLA Kolagatla Veerabhadra Swamy visited the township. He alleged that JSP was unable to digest the good schemes launched for the poor.

Police have made elaborate security arrangements for Pawan Kalyan’s visit as his recent visits to Visakhapatnam and Guntur had sparked tension.

Last month, Pawan Kalyan had to return from Visakhapatnam without participating in the scheduled public meeting as the police barred him from addressing any gathering following attack on convoys of a minister and some YSRCP leaders allegedly by Pawan Kalyan’s supporters outside Visakhapatnam Airport.

The actor-politician on Friday night called on Prime Minister Narendra Modi in Visakhapatnam when the latter was on a visit to the port city. After the meeting, the first between the two leaders since 2014, Pawan Kalyan had expressed the hope that this would bring good days for Andhra Pradesh.

Pawan Kalyan, an ally of BJP, is keen to forge a grand alliance by bringing Telugu Desam Party (TDP) on board to defeat YSRCP in 2024 elections.

He had stated a few months ago that he is waiting for a roadmap from BJP to dislodge YSRCP from power.