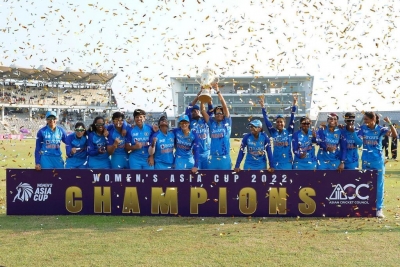 New Delhi:  In a landmark decision, Jay Shah, the secretary of the Board of Control for Cricket in India (BCCI) announced on Thursday that India’s women international players will receive match fees which are equal to their male counterparts.

With the BCCI now showing progressive thinking in terms of women’s cricket in the country, Thursday’s announcement was graciously welcomed by many former and current cricketers in India and abroad.

Former India cricketer Mamatha Maben, who captained the side in 19 ODIs from 2003 to 2004, spoke to IANS about the pay equity decision as well as the impact of it in future, what more can be done for absolute parity and more.

Q. What were the initial thoughts when you heard of the pay parity announcement on Thursday?

A. It’s so monumental that a day (like this) has come. From when we had to pay from our pockets to now getting equal pay. It’s huge and gargantuan in terms of setting the things in motion. I think this is the best thing to have ever happened.

Q. With pay parity now achieved in terms of international match fees, what do you think of the long-term impact on the future of women’s cricket in India?

A. More than the people in the top rug, I feel there will be a trickle down effect to such a great extent that now everybody is definitely going to make cricket a career option. In those terms, it will help in generating more people to join the game. Forget the thing that the girls are getting paid (equally), that’s a different story.

But, more than anything, the impact it’s going to have, it will be trickling down right up to the ground level. I think that will be huge, when people will start seeing things at least a little bit now in terms of both men’s and women’s game are attractive enough to make a career. Otherwise, in the past, we have had lost a lot of good talent because there was absolutely no career to be had in cricket.

Q. There are a few more areas, like domestic match fees, central contracts and number of matches played in a domestic season. Do you see this move set the ball rolling for achieving parity in the previously mentioned areas?

A. What I feel, eventually, at the state level, it should trickle down. Otherwise, that disparity will be too much. To be fair to BCCI, in terms of domestic, last year, they almost had a double or 100% jump I think they had (senior women’s match fees increased from 12,500 to 20,000).

But now that these people have gone up (international match fees), in future, even this will go up. More than anything, if they have contract system at the domestic level, it will help a great deal. But we must be grateful for what has happened though Australia and New Zealand have done that long time back. It’s a welcome step by the BCCI.

Q. Apart from this, earlier in the month, the Women’s IPL was also confirmed to be launched next year. So, can we say that this is the best time for a young girl to take up the sport and be a future India women’s cricketer?

A. Surely. There can be no better time and it’s only going to improve from here. I feel no matter what, nobody can stop women’s cricket now. It will organically flourish because a lot of systems are put in place. Even if one would stop women’s cricket, you can’t stop it from now. It is going to grow and mushroom all around. As it is right now, we can see a lot of talent mushrooming.

We were not aware as administrators that so many cricketers play the game, because when we call for open trials, so, so many, any age category people are coming, which means it is growing organically already. Now with IPL coming and then the team having equal pay, it is going to explode even further. I foresee women’s cricket being at a different level in another five years.

Q. Talking about the side, they have achieved a lot of success in the last few months: white-ball series victories in Sri Lanka, silver medal in Birmingham Commonwealth Games, winning ODI series 3-0 in England and winning Women’s Asia Cup in Bangladesh. How would you sum up these last few months for the Indian team?

A. I think, one of the best phases (the team had) after we had a little bit of dip in between. We are looking to play as a unit again. There was a little bit of Jhulan (Goswami) going off and Mithu (Mithali Raj) also going off. The re-organising has happened and I feel in the last two series, they are coming together as a team better now.

Though the talent was there, it’s not like suddenly the talent came. With the same set of players, coordination has become a little better now. We don’t know what is happening inside, but from the outside, it looks like they are gelling better, understanding things better, and looking more like a unit. I think that is where the results are reflecting.

Q. The Indian team’s next international assignment will be at home when T20 World Cup champions Australia come here in December for a five-match series. How do you think that would pan out?

A. It will be exciting, because the local series means we have an edge. Australia being the current champions, I won’t be actually surprised if we defeat them, though they are the number one side on paper. I think we have a fairly good chance to defeat them given that we are playing against them in home conditions.

Even abroad we beat them; it’s not like we don’t as we beat them once in a while. When I look at this team, I feel like they are getting the dynamics right now. But we are looking to play well at home, gelling well, and I just have a feeling that if things go our way, we can kind of win the series.