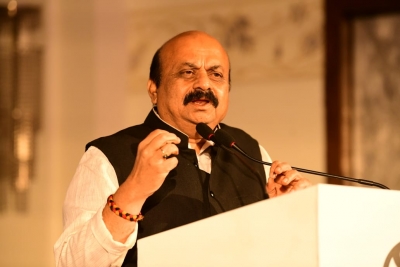 Chitradurga: Karnataka Chief Minister Basavaraj Bommai on Saturday accused the opposition Congress of playing “dirty politics” in connection with its PayCM campaign in the state.

If at all, there is any issue, it should be spoken directly. They should give evidence and records and it has to be investigated. Without anything in their heads they come to the session this shows their moral degradation, he said.

“This campaign is taken without any morality and mudslinging programme,” he stated.

“The Congress leaders are in the illusion of attaining power through carrying out dirty politics. This is not possible in Karnataka. The government would initiate legal action in this regard,” CM Bommai stated.

Reacting to the charge of Health Minister Dr K. Sudhakar that the Lingayat chief minister is being targetted, he said he wouldn’t want to comment anything on the issue.

When asked about pre-poll surveys suggesting that the ruling BJP would only get 95 to 100 assembly seats, way behind attaining a majority, CM Bommai stated that each survey will throw up different numbers.

“We have been in politics for 30-35 years. We can feel the pulse of the people. This time BJP is going to attain power,” CM Bommai explained.

He maintained that the state cabinet expansion would be taken up once the high command gave consent to it. Talking about the raids on PFI and SDPI leaders, he stated that the action had been initiated by the National Intelligence Agency (NIA) and the state police department.